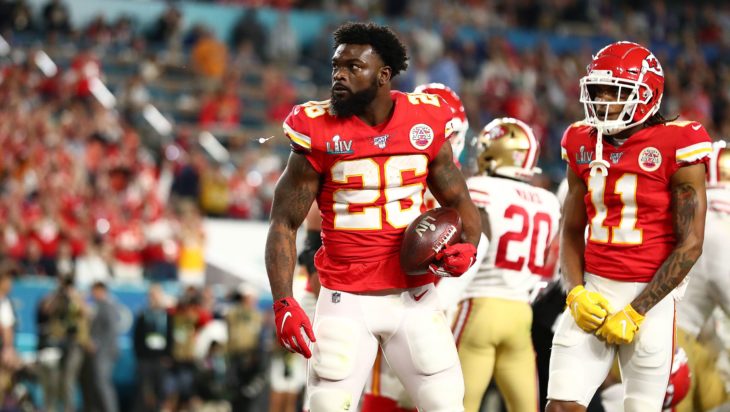 KANSAS CITY, Mo. — The Chiefs will head into the 2020 season with the Damiens back in the fold after the club picked up contract options for both running back Damien Williams and linebacker Damien Wilson.

Williams joined the Chiefs in 2018 as a free agent from Miami and signed a two-year extension in December 2018 worth $5.1 million. He carries a salary-cap number of $2.83 million in 2020 with a base salary of $1.85 million. Incentives could add up to another $1.5 million to 2020 compensation. The Chiefs would have absorbed a cap charge of around $530,000 if parting ways with Williams.

The 27-year-old running back battled injuries in 2019 but sizzled for the club late in the season and into the playoffs. He rushed for 196 yards and four touchdowns in three playoff games while hauling in 11 catches for 94 yards and two scores. Williams has 10 postseason touchdowns in five playoff games for the Chiefs in the past two seasons.

Wilson signed a two-year, $6.8 million free-agent deal with the Chiefs last March after leaving the Dallas Cowboys. Wilson will make a base salary of $3.2 million in 2020 with a salary-cap number of $5.375. His contract includes $875,000 in dead cap space from the $1.75 million signing bonus he received last season.

Wilson started 16 games for the Chiefs last season, picking up 81 total tackles and 1.5 sacks. He played 709 snaps for the club last season, although he didn’t play more than 44 snaps in any regular-season game after Week 9. He played a more frequent role in the postseason, averaging 40 snaps per game He picked up 19 total tackles in three playoff games.

The Chiefs have one more player with a contraction option for 2020 in offensive lineman Cam Erving. The club still has until 3 p.m. central time Wednesday to make a decision but the club has indicated privately it will not exercise the option. Erving would have accounted for $4.68 million against the salary cap in 2020, so the Chiefs save approximately $3.2 million against the cap by parting ways with the 27-year-old.

Erving came to Kansas City in August 2017 via trade with the Chiefs sending a 2018 fifth-round choice to Cleveland in exchange. Erving played 40 games for the Chiefs with 25 starts, primarily at left guard and left tackle. He spelled starting tackle Eric Fisher for eight games this season.