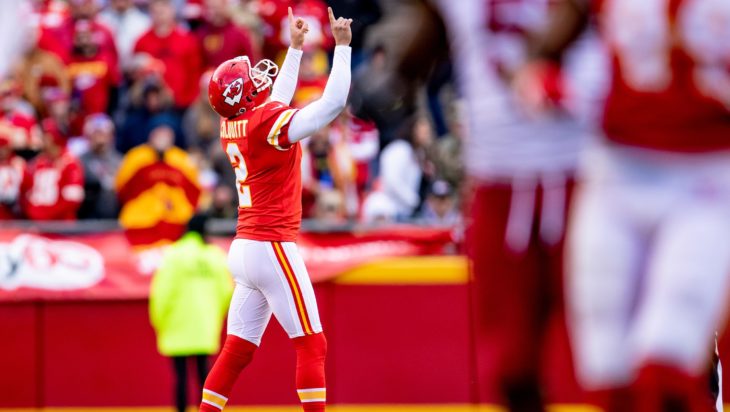 KANSAS CITY, Mo. — After 15 seasons with the Chiefs, Dustin Colquitt announced his departure from the Chiefs via an Instagram post late Monday night.

“I have enjoyed my time in Chiefs Kingdom, all things come to an end, sometimes sooner than you hoped, prayed and pleaded for them to,” Colquitt wrote on the post.

“I’ll miss walking into the building and smelling the coffee, talking to everyone,” Colquitt continued. “It took me forever to weave through some of the most loving people you’d ever hope to work with. I was a young kid when I first walked into Arrowhead. Hell, the indoor facility used to be 70 yards long. Holding this post for 15 years has been an honor that I never took for granted. Thank you KC.”

While Colquitt stopped short of announcing his retirement, he made it clear in 2018 he wanted to finish his career with the Chiefs.

Colquitt’s future with the team came into question on Saturday when the club signed undrafted rookie free agent Tommy Townsend from Florida. That gave the Chiefs a third punter under contract along with first-year punter Tyler Newsome, and undrafted free agent from Notre Dame in 2019.

Selected by the Chiefs in the third round of the 2005 NFL Draft, Colquitt belongs to the first family of punting in NFL circles. His father Craig Colquitt won two Super Bowl rings in seven NFL seasons, and his young brother Britton won a Super Bowl title with Denver in 2015 and is entering his 11th NFL season. Cousin Jimmy also briefly played for Seattle in 1985.

His 15 years with the club is tied for the longest service time with Jerrel Wilson, who punted for the Chiefs from 1963 to 1977 and was on the Super Bowl IV championship team.

Through his 15 seasons with the Chiefs, Colquitt became a fan favorite. He frequently stopped to sign autographs at training camp, starting a tradition where he asked young fans to sign his hat when they asked for his autograph. He was a mainstay at the team’s community events and a long-time supporter of organizations including TeamSmile, Fuel Up to Play 60, Athletes in Action and the Fellowship of Christian Athletes. He was selected as the club’s Walter Payton NFL Man of the Year Award in 2018 and 2019.

When Colquitt re-signed with the team in 2018, he said he wanted to finish his career with the Chiefs while “finishing the task” of winning a championship.

“That’s what we talked about in 2005, when me and Derrick (Johnson) came in here we all got cards which I still have,” Colquitt said, “has a picture of the Lombardi trophy saying ‘the main thing is the main thing’ and I’ve kept that card and I have all intentions when they drafted me in the third-round, staying here till that happens. If it happens too early in my career, like next year, I’m still going to say, just because that happened I kept the card and I still want to play here for six or seven more seasons.”

Colquitt’s retirement would save the Chiefs $2 million in cap space. He was in the final year of a contract with a base salary and workout bonus of $2 million with $650,000 in dead cap space. The NFLPA’s salary cap report showed the Chiefs with $4.9 million in available cap space, which doesn’t include the rookie draft class selected last week.

Colquitt’s club records with the Chiefs include: