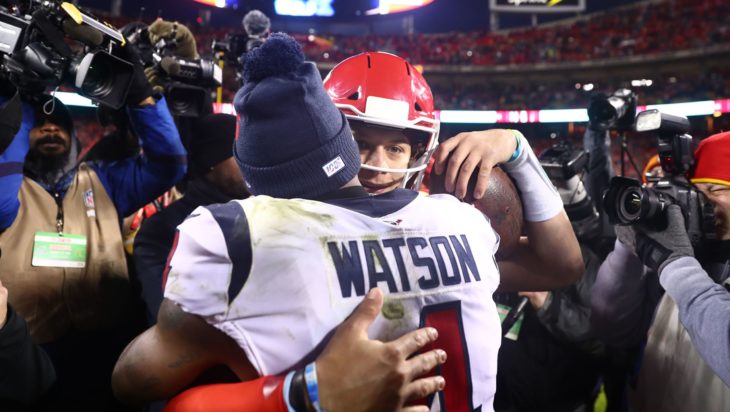 KANSAS CITY, Mo. — The Chiefs unveiled their schedule for the 2020 season Thursday night, a slate featuring five primetime games including the NFL season opener against the Houston Texans on Thursday, Sept. 10.

The Thursday night showcase normally allows the defending Super Bowl champions to celebrate their title, but how much the Chiefs will celebrate remains up in the air with the league still pondering its strategy amid the COVID-pandemic.

The Chiefs-Texans matchup is a natural choice for the season opener from among Kansas City’s 2020 home opponents. The Chiefs topped the Texans 51-31 in last season’s AFC Divisional Playoff game at Arrowhead Stadium, rallying from a 24-point deficit. It’s also a marquee matchup between quarterbacks Patrick Mahomes and Deshaun Watson, both of whom were selected in the first round of the 2017 NFL Draft.

If the Chiefs play a full 16-game schedule as planned, other highlights include a Week 3 trip to Baltimore for Monday Night Football in facing Lamar Jackson and the Ravens, a visit from the England Patriots in Week 4 and two home games to finish the season with visits from the Atlanta Falcons and Los Angeles Chargers.

The Chiefs face an old nemesis, quarterback Tom Brady, and his new Buccaneers in Tampa Bay in Week 12. The club hopes that game serves as a preliminary visit to Tampa, which is set to host Super Bowl LV next February.

The schedule falls relatively balanced for the Chiefs with no more than two-straight games on the road. The bye week falls before the start of a two-game road stretch, which means the Chiefs will go nearly a month between a Nov. 8 home game against Carolina before returning home Dec. 6 to host Denver.

The Chiefs play at home Oct. 11 against Las Vegas before traveling to Buffalo four days later to face the Bills.

Single-game ticket sales for games at Arrowhead Stadium begin on Friday, May 8, and will be available exclusively online. Jackson County taxpayers can purchase tickets from 8 a.m. to 10 a.m., while a presale for season ticket members begins at 11 a.m. Sales for the general public open at noon.

The availability for Jackson County taxpayers from 8 a.m. to 10 a.m. will be conducted entirely online for the first time. The Arrowhead Stadium ticket office will not be open on Friday. Purchasers must use a credit card with a billing zip code within Jackson County to participate.

If games are canceled or take place without fans attending, ticket purchasers will receive a full refund including fees for any impacted games.

Here’s the Chiefs 2020 schedule in its entirety. All times are central time.

Dates and game times for preseason games will be announced at a later time. All games are scheduled to air on the Chiefs television network, including KSHB in Kansas City,