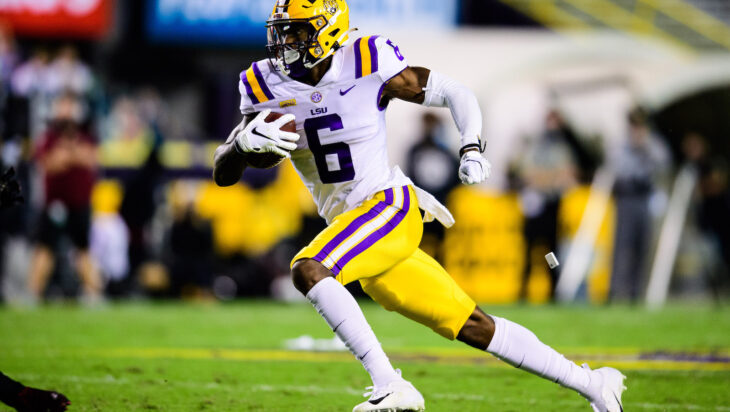 With 10 days until the 2021 NFL Draft kicks off in Cleveland, Chiefs Digest will explore different draft scenarios and opportunities that might present general manager Brett Veach and his staff as they navigate all seven rounds.

Each of our mock drafts will have rules and themes using different tools, resources and house rules. All of this will culminate on April 29 with how our ideal draft could playout for the Chiefs.

Here are the house rules for mock draft 1.0:
Draft simulator: TheDraftNetwork.com
Trades: None
Theme: Stick to the board, best available athlete
Big Board: TDN’s Predictive Board

Conventional wisdom says the Chiefs will go offensive tackle with their first pick in the draft, Marshall is too tempting a target not to grab in the first round.

Marshall tallied caught 94 passes for 1,402 yards and 23 touchdowns in 19 games the past two seasons with LSU. His 4.40 40-yard time shows speed, and his measurables, including his 6-foot-2, 205-pound frame all stack up very similar to a former Chiefs receiver: Sammy Watkins.

Marshall is raw but can stretch the field as well play physical underneath while providing a big target for Patrick Mahomes. He would also likely emerge as a fan favorite, especially given that his family connection to Joe Delaney, who died in 1983 attempting to save three drowning children. The former Chiefs running is Marshall’s great uncle.

This draft scenario would play out perfectly for the Chiefs to fill two needs early in the draft with some deft moving around the board. Only four offensive tackles were taken in the first round (Oregon’s Penei Sewell and Northwestern’s Rashawn Slater went in the first five picks with Virginia Tech’s Christian Darrisaw at No. 13 and Oklahoma State’s Teven Jenkins at No. 17).

With Marshall and Florida receiver Kadarius Toney on the board, the Chiefs could find a buyer for the No. 31 pick, move back in the second round and find a way to land a top-flight receiver and a tackle with upside. This would likely require moving up from No. 63 in the second round as well.

The hope that a top tackle would fall to No. 63 did not materialize; five more tackles went off the board in the second round, the last being BYU’s Brady Christensen at No. 52. Trusting the board rather than reaching for a tackle, Rousseau is a comfortable selection here.

The 6-foot-6, 266-pound edge rusher has only one full season of college football under his belt but what a season it was. He picked up 15 1/2 sacks in 2019, earning second-team All-American honors. He’s a raw player but fits the Chiefs’ need for a situational pass rusher in 2021 while possessing a high ceiling. He would be in good hands with defensive line coach Brendan Daly in developing as an all-around player.

Smith doesn’t come from a blue-blood program with a household name but he does possess one trait in rare supply among this year’s tackle draft class: size.

The 6-foot-5, 305-pound Smith has an 85-inch wingspan and 35-inch arms, giving him the most length of any of the top tackle prospects in this year’s draft. He stood out at this year’s Senior Bowl practices, erasing any concerns about an ankle injury that ended his 2020 season early. The Chiefs covet length and flexibility at tackle, and Smith possesses both in spades.

The Chiefs could complete their linebacker corps of the future pairing Rice with 2020 second-round selection Willie Gay. Rice led the Bulldogs with 89 tackles as a junior and serve as a team captain last year.

Gay brings athleticism to the linebacker position while Rice brings toughness. Both players are energy givers on defense and should play off one another well.

Veach covets production at cornerback, and Brown’s ability to find the football stands out despite a 5-foot-9, 185-pound frame.

Brown broke up 35 passes at Oklahoma along with four interceptions and earned All-Big 12 honors twice, including once as a kick returner. He excelled at the 100 meters and 200 meters on the Sooners track team thanks to his 4.40 40-speed.

Brown probably doesn’t have the size to matchup on the outside but his speed and aggressiveness should work as a nickel back, allowing last year’s draft diamond L’Jarius Sneed to move outside full time.

The 6-foot-3, 299 pound Dalman earned first-team All-Pac 12 honors last season and was a team captain for the Cardinal in his final season. Dalman started 20 games at center over the past three seasons and also has some experience at guard, providing the Chiefs with versatile depth at the interior positions and a potential starting center candidate down the road.

The accidental theme of this draft is doubling down on weapons for Mahomes. Smith posted a 4.43 40-time at this pro day and caught 174 passes for 2,204 yards and 13 touchdowns in 43 games for the Gamecocks. Smith is also an exceptional special teams player as both a gunner and a returner who special teams coordinator Dave Toub could find plenty of snaps.

Another weapon for Mahomes at a position of needed depth. The return of Blake Bell adds some punch to the Kansas City tight end room but Poljan has the size (6-foot-6, 251 pounds) and skills (38 catches for 421 yards and six scores last season) to serve as an apprentice under Travis Kelce. The Chiefs need an effective pass catcher on the tight end depth chart, and Poljan showed growth at Virginia as a graduate transfer from Central Michigan.

Not landing an offensive tackle in the first two rounds hurts but overall this draft produces depth at positions of need along with athleticism and upside. Some injury concerns among this crew but also heavy on leadership.

The Draft Network mock draft machine is solid but has limited draft board options and produced some wonky results. Sewell landing in San Francisco at No. 3 started some head-scratching results.