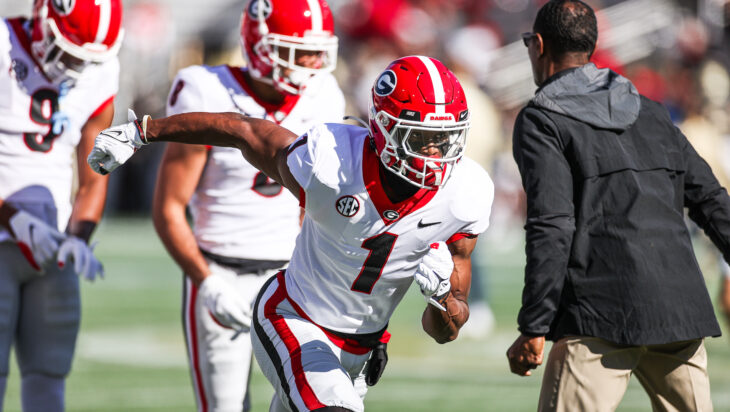 KANSAS CITY, Mo. — In our first mock draft for the Chiefs, we played it straight with zero trades and no specific theme. The second mock draft played out a scenario of trading up for defense and landing an edge rusher in the top 20.

In this scenario offense will be the priority, focusing on landing a skill position player with a first-round grade. The goal is to mimic what general manager Brett Veach might do in a similar situation and identify what it might cost for the Chiefs to make a move from No. 29 in the first round.

This draft went sideways quickly with Alabama receiver Jameson Williams going to Seattle at No. 9. Ohio State’s Garrett Wilson went next at No. 10, with Drake London (No. 15) and Chris Olave (No. 17) making it four receivers gone in the top 17. Moving up to land Arkansas’ Treylon Burks (gone at No. 25) didn’t move the needle for me in this draft.

In this scenario the Chiefs would have needed to move inside the top 10 to land the receiver of their choice. Don’t forget that in 2017 it cost the Chiefs two first-round selections and a third-round pick to move from No. 27 to No. 10 to land Patrick Mahomes. Moving from No. 29 into the top 10 would require a similar cost.

For this draft scenario, our plan is out the window and it’s time to adjust.

Pickens is the best remaining receiver on my board, and he’s worthy of No. 29 even if we hoped he might slide further back. His tracking ability, hands and size (6-foot-3, 195 pounds) are an ideal fit for the Kansas City offense. It’s easy to imagine Pickens connecting on deep vertical throws and defeating smaller cornerbacks for jump balls while providing Patrick Mahomes a different kind of target that he hasn’t had since the departure of Sammy Watkins.

The Chiefs holding back-to-back selections late in the first round means the draft war room can milk the clock, taking up 20 minutes if necessary to move out of the No. 30 position. That’s what happens here. With a lack of players with first-round grades remaining on the board and no quarterbacks off the board, it’s a prime opportunity for the Chiefs to move back. The Atlanta Falcons were one of five teams interested in moving to No. 30, and they have two selections in the second round available. The Chiefs sent No. 30 overall along with a third-round (No. 94) and a fourth-round (No. 121) choice to the Falcons in exchange for No. 43 and No. 58 this year along with a 2023 sixth-round choice. This provides the Chiefs with five selections in the first 62 picks and four choices in the golden zone between No. 43-62.

In a situation similar to the 2016 NFL Draft when the Chiefs traded out of the first round and still landed defensive lineman Chris Jones, Paschal would have been the choice at No. 30. At No. 43 he’s a great value. Paschal is also similar to Jones in that he’s athletic with a quick first step yet can also pack a powerful punch. He’s got the flexibility and bend necessary to maintain leverage, which the Chiefs prize in edge rushers. He’s one of the defensive linemen in this draft who can step in and play immediately against both the pass and run.

This is where this draft scenario starts slipping away from the Chiefs. That’s no knock against McCreary, who was a first-team All-American for the Tigers and racked up 37 passes defended and six interceptions during the past three seasons. Although he stands 5-foot-11, 190 pounds, his limited length (70 5/8 inches) isn’t standard for a Chiefs cornerback. He’s not the classic fit for the Chiefs, but the production is hard to ignore. He might be best suited as a nickel corner, which would allow L’Jarius Sneed and Rashad Fenton to play outside.

Scanning the board, however, most of the best value is at positions such as linebacker and interior offensive line where the Chiefs don’t have a huge need. That will be a continuing theme for the next four selections.

Hall is one of the more polarizing players in this year’s draft, with projections ranging from the late first round to the third round. There’s also a question as to his best position — he played primarily inside at Houston but some evaluators believe he can play the edge in the NFL thanks to his athletic 6-foot-6, 283-pound body. He’s probably best suited to play on the interior, however, and a front of Frank Clark, Chris Jones, Paschal and Hall would be well equipped to compete in a beefed-up AFC West. The “tweener” tag on Hall as an outside or inside player poses the concern that he’s neither, but it’s a risk worth taking here in the second round.

Receiver wasn’t necessarily the target here but Metchie stands out on the board among the best remaining skill players available. He doesn’t have Tyreek Hill’s speed and athleticism but he’s much more refined as a receiver than Hill was at this point in his career. He delivered a breakout campaign for the Crimson Tide last season with 96 catches for 1,142 yards and eight touchdowns before tearing his ACL in the SEC Championship game. Indications are he will be cleared for football duties by June and be ready for training camp. If Metchie cleared his physical evaluation during his top-30 visit with the Chiefs, this is another risk worth taking.

Yes, the Chiefs took Noah Gray last season but Woods is a different type of specimen who could easily carve out a role in the Kansas City offense. He arrived at Oklahoma State as a quarterback before moving to tight end during his redshirt freshman season. He served as primarily a blocking tight end for the Cowboys before transferring to Virginia for his fifth season, earning first-team All-ACC honors with 44 catches for 598 yards and eight touchdowns. At 6-foot-7, 253-pounds he’s a potentially high red zone target who enters the NFL with more blocking skills and experience than most other tight ends.

Safety remains a position the Chiefs need to fill even with the addition of Justin Reid. The jury remains out on Juan Thornhill and the No. 3 safety role is definitively up for grabs. Woods is a speed demon (4.36 seconds in the 40-yard dash at the NFL Combine). He has the speed to cover the middle of the field but also has the ability to play the slot while lining up against receivers and tight ends.

This is a project selection with a ton of upside. Van Demark started as a freshman at right tackle before moving to left tackle and was a team campaign for the Huskies last season. Needs some refinement but evaluators praise his technique and quickness. Likely a swing tackle but could compete for a starting role at either position with coaching.

Back-to-back tackles in the seventh round — not expected but worth a gamble. Lowe is a player not expected to necessarily be available at this point in the draft. Shares a lot of similarities with his former Illinois teammate Nick Allegretti with 52 college starts under his belt. He has a prototype NFL tackle body — 6-foot-4, 314 pounds with 35 3/8-inch arms. Worth taking a shot here on a player with plenty of experience.

Spector was one of the selections in mock draft 1.0 for the same reasons he’s selected here. He has a plethora of experience playing big-time college football and at a minimum, he projects as a four-phase special teams player. He played both safety and linebacker at Clemson, and he’s a true tweener 6-foot-1, 233 pounds. He might be the next Dorian O’Daniel, who gave the Chiefs plenty of quality special teams work. It remains to be seen if Spector can become a significant contributor on defense.

Veach said he believes there’s a 1,000-yard back in his year’s class of seventh-round selections and undrafted free agents. Ebner might not be that, although he rushed for 799 yards for the Bears last season. He’s the selection here thanks to his ability to catch the ball out of the backfield (127 receptions for 1,515 yards and 11 touchdowns in his college career) and his big-play ability as a kick returner. He averaged 25.3 yards on kick returns with three returns for touchdowns during the past seasons and was twice the Big 12’s special teams player of the year. Could be a chess piece both for Andy Reid’s offense and Dave Toub’s return teams.

Pro Football Focus gave our draft a B and I don’t disagree. This draft addresses nearly all of the club’s needs but takes a few swings on project players with a steep development curve. There are a couple of players with injury histories or character questions that might leave them off some draft boards. It’s also a group heavy on athleticism and production, however, which are both hallmarks of Veach draft classes.

Sometimes drafts unfold unexpectedly and sometimes they are as predictable as the sun rising in the morning. This draft scenario was largely predictable with few glaring players dropping early. In that scenario, a general manager needs to be ready to do one of two things: make an aggressive move to land the player he wants or sit back and let the board fall to him.

Both our defensive heavy and offensive heavy mock draft scenarios required the Chiefs to make aggressive moves to land players with first-round grades. The cost for moving into the late teens or early 20s for a player who slips through the cracks is very manageable for this team with 12 draft choices as of now. Moving into the top 10 is a steeper price, however, but will likely be required if Veach wants his choice of player.

The depth of this draft, however, is attractive. If the Chiefs can maximize value between picks 30 to 60 and even move up within sixth choices in the first 103 picks they can land a very lucrative draft class.