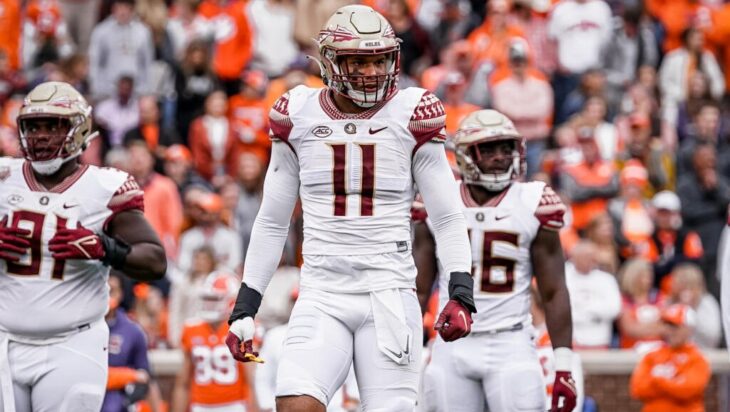 KANSAS CITY, Mo. — The NFL Draft rarely unfolds as expected, and the general managers who keep their cool as chaos unfolds around them usually prevail in the end.

In our first mock draft for the Chiefs, we played it straight with zero trades and no specific theme, allowing a glimpse at how a run-of-the-mill draft might unfold. The mission in this draft will be to shore up the pass defense, trading up to acquire a top edge rusher in the first round and landing a cornerback in the top 50. The Chiefs will also be seeking a wide receiver early, staying alert for both good value and scheme fit.

Jacksonville opened the draft with a stunner, selecting Alabama offensive tackle Evan Neal. Even though Michigan’s Aidan Hutchinson and Oregon’s Kayvon Thibodeaux then went next to Detroit and Houston respectively, only four edge rushers went in the first 17 selections. Atlanta went with Georgia’s Travon Walker at No. 8, and Purdue’s George Karlaftis went to the Chargers at No. 17.

That’s when the Chiefs made their call to the Philadelphia war room at No. 18. The Eagles bargained hard, however, eventually only surrendering the pick in exchange for the No. 29, a second-round choice (No. 50 overall) and a fourth-round selection (No. 135).

Johnson is the fifth edge rusher off the board in this year’s draft and one of the more productive Power Five pass rushers last season. He tallied 12 sacks and 18 tackles for loss last season as a team captain and the ACC defensive player of the year. Johnson took a winding path to the NFL starting at Independence (Kan.) Community College as a featured player on the Netflix series “Last Chance U” and then spending two seasons with Georgia before reaching Florida State. Johnson relies on relentless pursuit to get to the quarterback and needs refinement in his initial burst but is a consistent three-down performer.

London delivered a breakout junior season with the Trojans, hauling in 88 catches for 1,084 yards in just eight games. At nearly 6-foot-4 and 219 pounds, London isn’t a Tyreek Hill clone in anyway but should be a seamless fit in the Chiefs offense as someone who can play both a traditional X-receiver role and line up in the slot. A broken ankle in October ended his season and keet him out of the NFL Combine but teams expect to get a look at his progress at the USC pro day on April 15.

The Chiefs use more of their excess draft currency to move up in the second round to snag one of the more underrated cornerback prospects in this year’s pool. Kansas City sends No. 62 in the second round along with a third-round choice (No. 94) and a 2023 sixth-round pick to acquire Woolen, who becomes the eighth cornerback off the board in this mock draft. He towers over most receivers at 6-foot-4 yet posted a blazing 4.26-second 40-yard dash time at the NFL Combine. He played receiver at UTSA before moving to cornerback at the end of his redshirt sophomore season. He doesn’t fit the traditional model for a Chiefs secondary player with a ton of production (11 passes defended and two interceptions in 20 games) but has elite tools for the position.

Cook started as a cornerback at Howard before moving to safety when he joined the Bearcats, and he capped off his senior season with a nine tackles and an interception against Alabama in the College Football Playoff semifinal. He’s tenacious against the run and shows a willingness to deliver big hits. Cook is a late bloomer he is continuing to mature.

Paschal might be the most overlooked edge player in this year’s draft despite 5.5 sacks and 15.5 tackles for loss last season. He also earned second-team All-American honors as a team captain for the Wildcats. He underwent three surgeries and immunotherapy treatments for a malignant melanoma on his foot in 2018, and medical questions are a likely reason he’s projected in the third or fourth round. Much like Trey Smith a year ago, the team that takes a chance on Paschal will likely get rewarded.

Not often a two-year starter for the Crimson Tide is available in the seventh round. Jobe is likely here due to a disappointing 2021 season during which he struggled with a turf toe injury that required surgery in December forcing him out of the College Footbal Playoff. The team drafting Jobe hopes he’s closer to the player he showed during the 2020 season when he broke up 11 passes and picked up 2.5 sacks while forcing two fumbles.

A team captain and All-Sun Belt selection last season, Jackson racked up 120 tackles including 19 for a loss along with six sacks and an interception for a stingy Applachain State defense. Jackson has better than average athleticism but his football IQ and aggressiveness should make him a four-phase special teams player as a backup linebacker if he sticks.

Another “Last Chance U” alum, Jones put together an impressive resume at Coastal Carolina that included a 1,000-yard rushing season in 2021 as the team’s offensive MVP. He also earned President’s List honors (4.0 GPA in both his junior and senior seasons while graduating in December with a degree in recreation and sport management. Jones also met with the Chiefs during the buildup to the draft as one of the team’s top-30 visits.

The Chiefs front office has a penchant for trying to find the next Trey Burton, and Conner fits the bill. A productive pass catcher with 137 receptions for 2,384 yards and 15 touchdowns in 47 college games, Conner projects as a tight end/H-back type player who in theory can offer a mismatch against linebackers or safeties. Profiles as a solid special teams player as well.

Disappointingly the Pro Football Network draft tool doesn’t give you a draft grade, although given the inconsistency of the draft board that’s not necessarily a major loss. I will give this grade a B-minus. I’m not sold that moving from No. 30 to No. 18 was a great value, although the only upper-tier edge rushers available at No. 29 would have been Boye Mafe (Minnesota) and David Ojabo (Michigan). London is a consensus first-round receiver, so that’s a very good value at No. 30. Ideally Woolen or someone of his caliber is available later in the second round, but after Washington’s Tyler Gordon went to Baltimore at No. 45 as the eighth cornerback drafted it was time to make a move.

Cook and Pachal are both good value picks. This draft only lands one player in the fourth, fifth and sixth rounds where there should be some excellent value at multiple positions

Mock draft 2.0 reinforces that the top four edge rushers are probably outside Kansas City’s range unless Veach is willing to move into the top 15. The top-tier cornerbacks were also gone before No. 29. The one area in this draft where talent dropped was wide receiver. There’s no guarantee that will help on draft night, however.

While this scenario highlighted the options of moving up both in the first and second rounds, it also illustrated where the Chiefs might gain the most value — moving back to acquire more picks in rounds four and five as well as future picks. This draft has some depth at key positions, and with the Chiefs only holding one pick in rounds four, five and six, they might miss out on some bargains.

In our next mock draft, we’ll make offense a priority and see what happens if Veach and company decides to give Patrick Mahomes another weapon before addressing the defense.