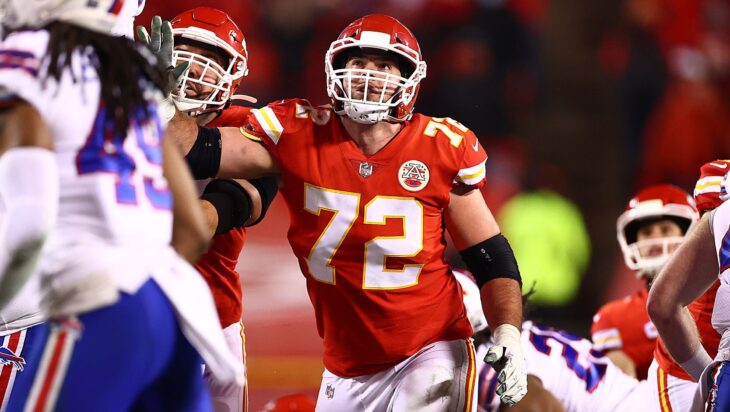 The Chiefs advanced to Super Bowl LV in two weeks by virtue of their 34-28 victory over the Buffalo Bills in Sunday’s AFC Championship game but the club also suffered a devastating loss with Pro Bowl left tackle Eric Fisher leaving the game with an Achilles injury.

“It doesn’t look too good with his Achilles,” Reid said.

When asked if the tendon were torn, Reid replied with, “We think so.”

“We haven’t got that far with it, but it doesn’t look good, I’d tell you.”

“I think those guys will be OK,” Reid said.

The loss of Fisher cannot be understated for the Chiefs, who are 27-1 with Fisher in the lineup during the past two seasons. The Chiefs are 4-5 when Fisher didn’t play during that time.

Upon Fisher’s exit, the Chiefs moved Mike Remmers from right tackle to the left, shifted right guard Andrew Wylie to right tackle and inserted Stefen Wisniewski at right guard. That left the Chiefs with just a single lineman — center Austin Reiter — in the same place he started the season in Week 1.

The Chiefs could use the same makeshift line when they take the field against Tampa Bay in Super Bowl LV in two weeks. That lineup, along with Nick Allegretti at right tackle, provides the Chiefs with arguably their best blend of experience and chemistry among linemen on the active roster.

Other options exist, however. Both Martinas Rankin and Yasir Durant have experience at tackle. Rankin started at left tackle and Durant at right tackle against the Los Angeles Chargers when most of the team’s starting lineup rested in Week 17.

A more longshot option would be Mitchell Schwartz, who remains on injured reserve. Schwartz hasn’t played since Week 6 due to a back injury and has yet to return to practice with the club. The Chiefs haven’t closed the door on Schwartz returning this season, but his return is still far from imminent.

This is also far from the first obstacle this season facing the Chiefs’ offensive line, which also lost Laurent Duvernay-Tardif and Lucas Niang to COVID-19 opt-outs and free-agent addition Kelechi Osemele to dual knee injuries.

The offensive line has continued to play with attitude and a mentality to finish said quarterback Patrick Mahomes, who added, “We go as they go.”

“Those guys have just been battling,” Mahomes said. ‘They’ve been battling, they’ve accepted the challenge. When they play the way they’ve played these last two games we’re a hard team to beat. We put that on them.”