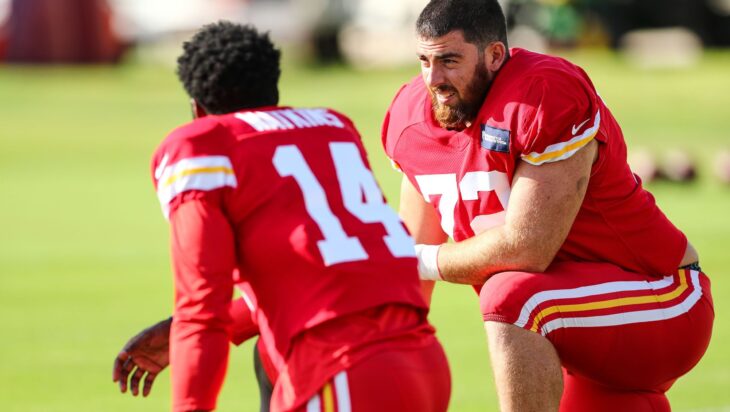 Fisher reportedly walked off the field under his own power and spent time getting an evaluation from athletic trainers before leaving the practice field. Reid said Fisher is now in the league’s concussion protocol.

Fisher joined a handful of projected starters on the sideline Sunday, including wide receiver Sammy Watkins (groin) and defensive tackle Chris Jones (groin). Running back Clyde Edwards-Helaire appeared at practice in pads but did not work during team periods.

“Clyde was a bit dehydrated so we just held him out a little bit,” Reid said.

Defensive tackle Derrick Nnadi has yet to practice in pads with the club during the beginning of training camp. Nnadi underwent ankle surgery in the offseason, and the club is easing him back into practice, Reid said.

While athletic trainers raised concerns about soft tissue injuries such as groin and hamstring injuries following an offseason without formal workouts due to the COVID-19 pandemic, Reid doesn’t see any reason for alarm at this point in camp.

“The soft tissues are the same as it is every year,” Reid said. “You get into that third and fourth practice and goes are sore, normally the groin area. That’s how it works. That’s what we’re still dealing with that now. It’s right about the same numbers we have every year. That hasn’t been anything crazy.”