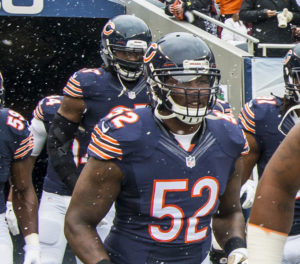 A surveillance video shows Greene handing a gun to a man outside the Allstar Night Club in Elizabeth, N.J., on Dec. 3, according to court records obtained by The Star-Ledger.

The records indicate the man, Jason C. Sanders, fired the gun into a crowd of people. The documents did not indicate if anyone was injured in the incident, according to the paper.

The Chiefs signed Greene to a futures contract in January. He earned Big East Conference defensive player of the year honors in 2013. The Chicago Bears selected Green in the fourth round of the 2013 NFL draft.

The four-year NFL veteran also spent time with Tampa Bay and Detroit. He compiled 38 tackles and one interception in 25 career games.