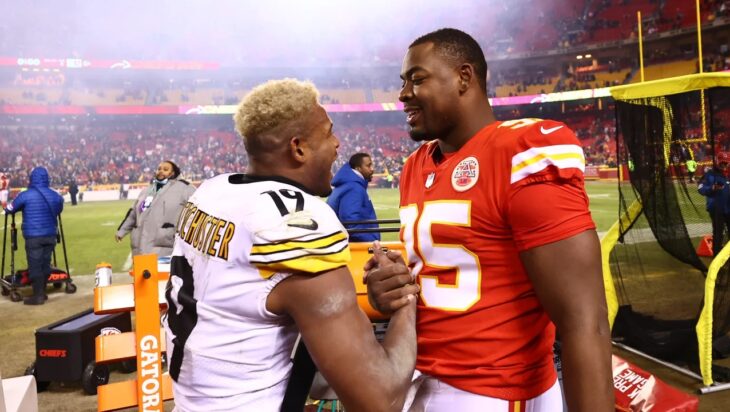 KANSAS CITY, Mo. — The Chiefs made an effort to land wide receiver JuJu Smith-Schuster during free agency a year ago, but the club didn’t let him get away a second time, agreeing to terms Friday with the 25-year-old wideout.

The Chiefs and Smith-Schuster agreed to a one-year deal worth up to $10.75 million, according to ESPN.

The Chiefs currently have 10 other receivers on the roster including Mecole Hardman, Josh Gordon, Daurice Fountain, Gehrig Dieter and Cornell Powell among others.

Smith-Schuster told NFL Network he chose the Chiefs in order to play with quarterback Patrick Mahomes and with the goal of winning a Super Bowl ring.

The Chiefs pursued Smith-Schuster during free agency last season before the wideout returned to the Pittsburgh Steelers on a one-year, $8 million contract that kept him paired with quarterback Ben Rothlisberger for one more season.

A shoulder injuring during Week 5 cut his season short, limiting him to 15 catches for 129 yards and a touchdown. Smith-Schuster returned for the Steelers’ Wild Card appearance against the Chiefs in January, catching five passes for 26 yards in the loss.

The Chiefs are banking on Smith-Schuster returning to the form that made him a Pro Bowl players in his second season in 2018. He posted career highs that season with 111 catches for 1,426 yards and seven touchdowns.

Mahomes and Chris Jones were among Chiefs players reacting to the addition of Smith-Schuster on social media.