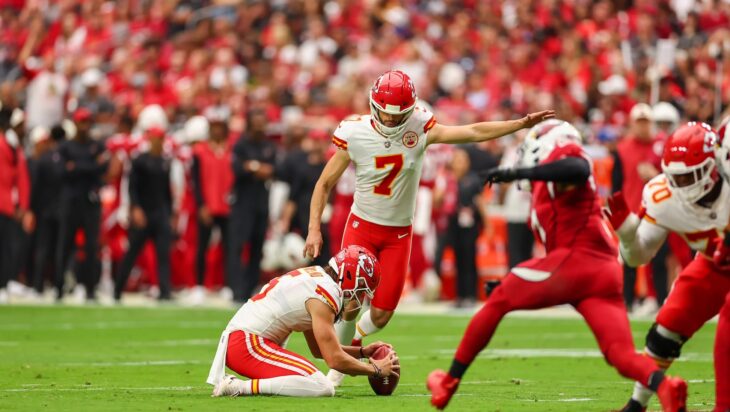 KANSAS CITY, Mo. — While kicker Harrison Butker and cornerback Trent McDuffie are still addressing the consequences of their injuries in the Chiefs’ 44-21 win over Arizona Sunday, the team delivered promising news regarding the left wrist of quarterback Patrick Mahomes on Monday.

The team listed Mahomes as a full participant on Monday’s injury report. That’s an estimation of what would have been expected if the Chiefs held a formal workout. With the club preparing to host the Los Angeles Chargers Thursday night, players didn’t report to the facility until late afternoon Monday.

Butker, who sprained his ankle in Sunday’s game, and McDuffie, who left with a strained hamstring, were both listed as did not participate. The Chiefs were planning to explore their options in the event Butker can’t play on Thursday, which included working out former Chargers kicker Tristan Vizcaino on Monday.

Also listed on the injury report were left tackle Orlando Brown (knee), right guard Trey Smith (ankle), and wide receivers JuJu Smith-Schuster (shoulder) and Justin Watson (chest). The quartet was listed as limited in participation. The shoulder injury for Smith-Schuster is a new designation for him — he was listed with a knee injury on last week’s report.

The Chargers also issued an estimated practice report without a formal team workout Monday. Wide receiver Keenan Allen, who left the team’s win over Las Vegas with a hamstring injury, was listed as did not practice. The team is continuing its medical evaluation of Allen before determining his status for Thursday night, according to head coach Brandon Staley.

“It’s kind of in progress as we speak,” Staley said.

“I think that he should be on the field Wednesday to kind of see exactly where he is,” Staley said. “But he’s in a better spot, I would say, than yesterday, or the day before. I would say 50/50 for the game.”