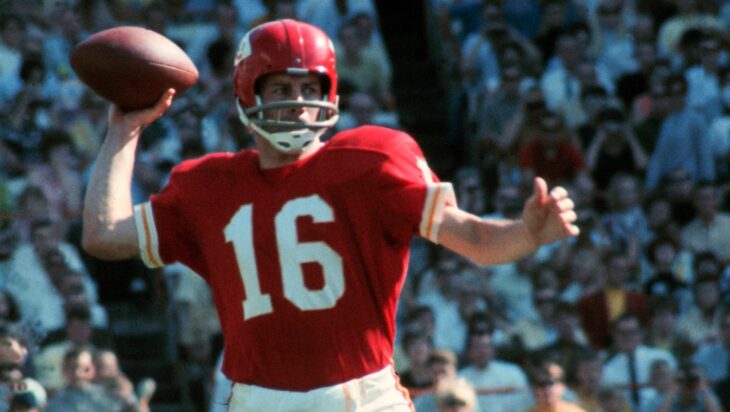 KANSAS CITY, Mo. — Hall of Fame quarterback Len Dawson, who led the Kansas City Chiefs to their lone Super Bowl championship following the 1969 season, died Wednesday at the age of 87.

The Dawson family announced his passing in a statement issued through his long-time employer, KMBC-TV.

“With wife Linda at his side, it is with much sadness that we inform you of the passing of our beloved Len Dawson,” the statement read. “He was a wonderful husband, father, brother and friend. Len was always grateful and many times overwhelmed by the countless bonds he made during his football and broadcast careers. He loved Kansas City and no matter where his travels took him, he could not wait to return home.”

“My family and I are heartbroken. Len Dawson is synonymous with the Kansas City Chiefs. Len embraced and came to embody Kansas City and the people that call it home,” Hunt said in the statement. “You would be hard-pressed to find a player who had a bigger impact in shaping the organization as we know it today than Len Dawson did.

“I admired Len my entire life – first as a Hall of Fame player on the field, and later as he transitioned into a successful broadcasting career. Throughout his remarkable career, Len made it a priority to give back to the community that he loved. The franchise has lost a true legend. Our thoughts and prayers go out to Linda and his family.”

Dawson was born in Alliance, Ohio, on June 20, 1935, and earned accolades early on the football field. The International News Service named Dawson the outstanding back of the year in high school and he earned all-state honors in both football and basketball. He left Ohio for college, spurning the Ohio State Buckeyes in favor of Purdue, where assistant coach Hank Stram recruited him to play.

Following a prolific career for the Boilermakers, the Pittsburgh Steelers selected Dawson with the fifth selection in the 1957 NFL draft. But Dawson failed to make an impression in the senior league during five seasons with the Steelers and the Cleveland Browns, which released Dawson following the 1961 season.

That move proved fruitful for Dawson and changed the course of one of the American Football League’s founding franchises.

Stram, now the head coach of the Dallas Texans, signed the 27-year-old Dawson as his new quarterback. He led the Texans to the AFL championship, earning league MVP honors. The following season the Texans relocated to Kansas City, where Dawson emerged as a staple of the community for more than a half-century.

The newly minted Chiefs continued their winning ways under Dawson, who piled up numerous awards including the AFL’s Most Valuable Player in 1962, AFL Championship MVP in 1966, and the MVP of Super Bowl IV. The quarterback led the franchise to three AFL titles and earned six AFL All-Star awards. He was named to the AFL All-Time Team selected in 1970 after the league merged with the NFL.

The partnership of Dawson and Stram helped the AFL launch an era of wide-open offenses in professional football. Dawson four times led the league in touchdown passes and was the AFL’s passer rating leader six times. He led the AFL in completion percentage seven times, including six-consecutive seasons from 1964 to 1969.

In 1966 Chiefs general manager Jack Steadman lobbied television station KMBC to add sports to its 10 p.m. newscast to help promote the team better. The station manager asked if Steadman had any suggestions for an anchor – and Steadman nominated his quarterback.

Dawson would practice with the team in the afternoon and then head to the station to anchor sports during the early evening news. He would go home for dinner with his family and then return for the 10 p.m. newscast. Dawson continued anchoring sports for KMBC until he stepped away from full-time work in 2009.

National audiences knew Dawson from his work as an analyst for NBC from 1977 to 1982 but it was his work on HBO’s “Inside the NFL” that made a lasting impact on the football scene. The program set the tone for highlights and in-depth storytelling commonplace on TV today, and Dawson was integral as the show’s anchor, using his connections and popularity around the league to lure top players for in-depth interviews. Dawson appeared on the program for 24 years after its launch in 1977.

Dawson’s more than a half-century on the airwaves also included his work as the color analyst for the Chiefs’ radio broadcasts from 1985 until 2017. The club name its television broadcast booth inside Arrowhead Stadium in Dawson’s honor in 2017.

He received the Pro Football Hall of Fame’s Pete Rozelle Radio-Television Award in 2012, becoming the third person inducted into the hall as both a player and broadcaster following Frank Gifford and Dan Dierdorf