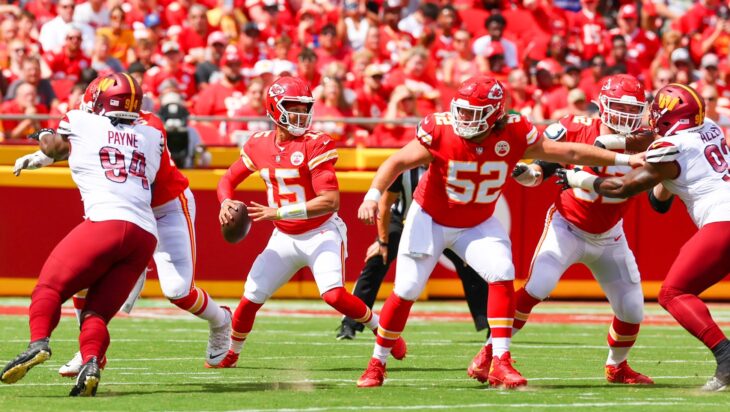 KANSAS CITY, Mo. – Head coach Andy Reid’s pregame plan called for Patrick Mahomes and his fellow starters to play most of the first half in Saturday’s 24-14 preseason win over the Washington Commanders.

But as soon as Mahomes connected with tight end Jody Fortson for the duo’s second touchdown of the day, Mahomes and the No. 1 offense headed to the bench with 13:22 left in the second quarter, their work done for the day.

Efficient work it was, too. Mahomes finished his outing 12-of-19 passing for 162 yards and two touchdowns, spreading the ball around to seven different receivers. The first-team offense took 24 snaps over two drives to move 169 yards, averaging 7.0 yards per play.

“It was good to get those,” Reid said. “There’s some things we can learn from them, we can do better, but I think the execution was pretty good there.”

Even without Pro Bowl edge rusher Chase Young, the Commanders’ front seven still poses a challenging obstacle, and the starting offensive line provided Mahomes with plenty of protection and time to throw.

“They’re missing a guy but that’s a talented defensive front,” Reid said. I thought it would be a good measuring stick for us at this time of the year. I thought they handled themselves well. We can do a little bit better in the run game part of it but the pass game part I thought was pretty efficient.”

Even when Mahomes escaped from the pocket, it was because nothing had opened up downfield and he had room to maneuver and buy additional time. It was the offensive line play Mahomes raved about when he arrived at the sideline after the second scoring drive.

“The pockets were amazing,” Mahomes said. “I was patting two, three times. If they block like that, we’re going to be a hard offense to stop because when you have that much time in the pocket, usually good things happen.”

The efficiency wasn’t limited to the offensive side of the ball. The Kansas City defense also shined against Washington, holding the Commanders to just 53 yards of offense in two drives. The No. 1 defense has now held opponents scoreless in four drives through two preseason games.

“I like what I’m seeing,” Reid said. “We’ve got to keep getting better. This is the preseason, so we’ve got to keep building on this but I do like the speed. (General manager) Brett (Veach) made it a priority to go get some guys that run, and that’s what you’re seeing, a little bit more speed there.”

Linebacker Nick Bolton paced the starting unit with three total tackles and also knocked down a third-down pass from Commanders quarterback Carson Wentz intended for receiver Curtis Samuel. That stop with 3:53 left in the first quarter allowed the first-team defense to complete its work early.

Washington got on the board late in the first half when quarterback Taylor Heinicke threaded the ball through a tight window into the hands of receiver Cam Sims for a 9-yard score. But unlike last week when the Chiefs’ reserves allowed a 14-0 halftime lead to slip away, the backups built upon and extended the lead in the second half.

Rookie defensive end George Karlaftis immediately got in the action again, picking up a third-down sack on Washington’s third drive for his second sack of the preseason. Karlaftis serves as another example of the speed upgrade Reid sees on the defensive side of the football.

“George is a 100 miles an hour all the time and I appreciate that, the effort,” Reid. “He’ll keep getting better with technique after he gets a feel of how these offensive linemen play him. But he’s a talented kid, smart, wants to be good.”

Cornerback Rashad Fenton was the only player to exit the game early with an injury after his groin tightened up during the first half. Reid said the injury doesn’t appear serious for Fenton, who recently returned from the physically unable to perform list after offseason shoulder surgery.

Six players did not dress for Saturday’s game. Receivers JuJu Smith-Schuster (knee) and Mecole Hardman (groin) did not play but it’s possible both could return to practice this week. The same is true for defensive tackle Chris Jones (back). Tight end Blake Bell (hip) was also absent.

Defensive end Carlos Dunlap and tight end Matt Bushman also did not dress but no reason was given for their absence. Quarterback Chad Henne did not play as part of the original game plan.

It’s a short week for the Chiefs, who after an off day on Sunday are back at their home training complex in Kansas City for practices on Monday and Tuesday in preparation for their preseason finale against Green Bay on Thursday. Kickoff is set for 7 p.m.

The Chiefs must also reduce their roster from 85 players down to 80 by 3 p.m. central time Tuesday.