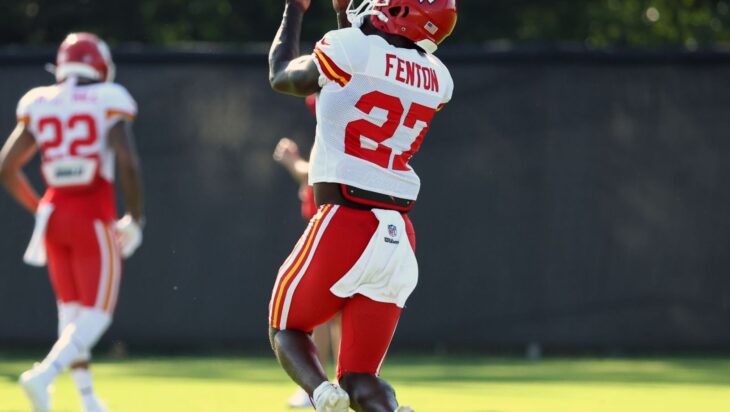 KANSAS CITY, Mo. — Chiefs cornerbacks coach Sam Madison knew he would face a challenge in 2019 with veterans Kendall Fuller and Morris Claiborne gone from last year’s Super Bowl team, but the suspension of Bashaud Breeland means he must expect an even bigger contribution from the club’s young defensive backs.

“We’re going to have a lot of young guys that’s out there that’s going to be play that don’t have many years in the league,” Madison said Thursday in discussing Breeland’s suspension.

The Chiefs have their No. 1 cornerback in Charvarius Ward, who enjoyed a breakout season in 2019 in this second year in the league. Ward enters this year’s camp as an emerging leader in the position group, and he’s expressing the confidence he can be a shutdown corner in the league.

Behind Ward with Breeland out for the first four games, however, is a relatively untested stable of young talent. At the front of the line is Rashad Fenton, last year’s sixth-round selection who played 244 total snaps last year, most coming at the slot corner position. He also picked up experience playing on the outside, and Madison sees him doing more of the same this season.

“Coming into this camp, he knew his exact role, he was going to be a dual guy, so he’s playing faster,” Madison said. “Now having the opportunity to mix him in with the ones, with the twos, playing corner, playing nickel is putting a lot on his plate but yet he’s still making sure he understands that he’s going to be needed in those roles later on during the season.”

Madison likes the effort he’s seen from Fenton in addition to the work he put in during the offseason.

“He’s making some plays, he’s around the ball, his quickness, Madison said, “He’s shown some burst throughout the course of this camp.”

With Fenton capable of playing on the outside and moving inside when the Chiefs move to sub packages with three or more corners on the field, that leaves an opportunity for free-agent addition Antonio Hamilton and this year’s sixth-round choice L’Jarius Sneed in battling for playing time.

Hamilton has played just 129 defensive snaps in his first four seasons in the league, and special teams coordinator Dave Toub currently pegs him as the club’s top gunner on kick teams. But Madison sees flexibility in Hamilton, not unlike how the club deployed Fuller in the close of the 2019 season.

“We’re using him on the inside, we’re using him on the outside because he has done both in his career,” Madison said. “Just trying to find the best pieces to the puzzle to put out there on the football field so we can win some games, but he’s definitely going to have an opportunity to be able to help us in multiple positions.”

In Sneed, the Chiefs see plenty of potential that just requires seasoning. Defensive coordinator Steve Spagnuolo on Monday delivered a message to the rookie to play with greater urgency.

“I just told him that he needs to do everything faster, and I’m talking about from when the play ends to getting back in the huddle,” Spagnuolo said. “These guys know how I am and part of this whole practice and coach (Andy) Reid wants it the same way, part of it is conditioning—and not having the offseason and all that.”

Sneed is picking up the lingo – “Is he picking it up as fast as we want to?” Madison said. “No, but he is working at it and at this point, he’s filling comfortable.”

The Chiefs are bringing along Sneed quickly, however, mixing him in with both the first- and second-team defenses. The experience with the first team is valuable development time, Madison explained.

“Being able to rotate him in with the ones, with the twos, when you’re with the ones, all they do is communicate,” he said. “Tyrann Mathieu, he tells everybody what to do, he knows what he’s supposed to do. Having somebody communicate those things that quickly, now you can go out and play fast.”

Ward, Fenton, Hamilton and Sneed appear likely to lead the depth chart starting the season with Breeland joining them in Week. If the Chiefs carry a fifth cornerback in Week 1, the competition will come between this year’s seventh-round selection BoPete Keyes, third-year corner Chris Lammons and undrafted rookie free agents Rodney Clemons and LaVert Hill