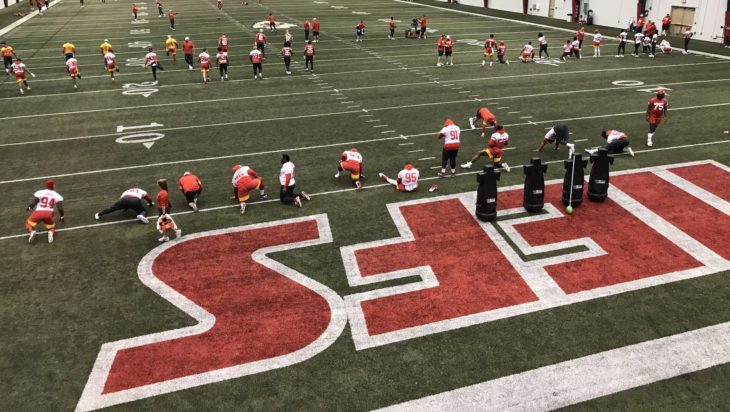 “He didn’t have a setback, so that was good,” Reid said. “We kept it to that 20-play area right there, which was smart, I think, and good for him.”

Kelce has been dealing with a bruised knee but the issue has not kept him out of the last two games.

Wide receiver Demarcus Robinson did not practice Wednesday due to an illness.

The Chiefs practiced in their indoor facility on Wednesday due to snow showers and cold temperatures in Kansas City. The squad held a light workout without helmets or pads, which is consistent with the club’s midweek routine since October.

Quarterback Patrick Mahomes said Reid has been telling his team before the playoffs to stay in “warm weather shape” in preparing for the Super Bowl in Miami.

“Guys have been getting extra running in, getting extra stuff in to make sure they’re ready to be in this opportunity and be in this spot,” Mahomes said. “Obviously we know going from snow and to 70, 80 degrees is going to be different. But we’re going to make sure that we prepare ourselves physically and mentally to go out there and be able to play a full four quarters of whatever it takes.”

The San Francisco 49ers did not practice on Wednesday but issued an estimated injury report based on anticipated participation. Only running back Tevin Coleman (shoulder) was listed as not available to practice.