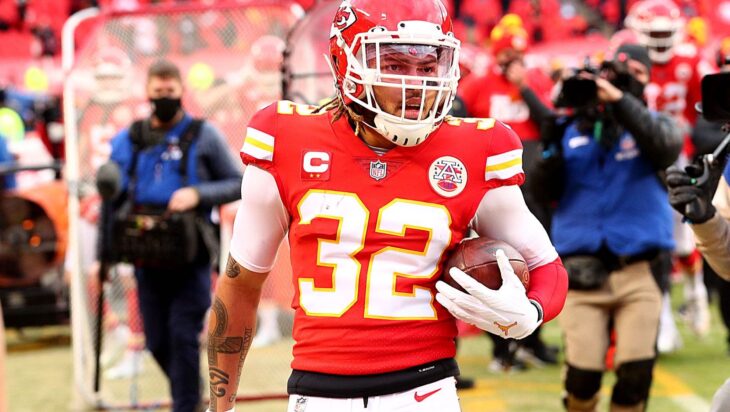 Moments after Chiefs backup quarter Chad Henne lofted an interception into the hands of Cleveland safety Karl Joseph, the Kansas City defense led by Tyrann Mathieu took the field with one objective in mind.

“It’s all about making a stop,” Mathieu said. “I think anytime you get in the game, it gets critical, the score gets tight, it’s all about the outcome of the game. How can we win the game? How can make the right plays, the routine plays?”

The Chiefs defense made the routine plays at the right time on Sunday, helping the team claw out a 22-17 win over the Browns and advance to next week’s AFC Championship against the Buffalo Bills at Arrowhead Stadium.

The vaunted Browns rushing attack mustered just 18 yards in the first half, with Nick Chubb picking up just 12 yards on five carries with two drops in the passing game. Former Chiefs running back Kareem Hunt didn’t have a single touch in the first half, and the Chiefs led 19-3 at halftime.

The start of the second half looked like the Chiefs defense might put the game away early. On the third snap of the third quarter, Mathieu saw receiver Jarvis Landry heading into his zone quickly followed by Baker Mayfield scrambling out of the pocket.

“I wanted Baker to think I was going somewhere other than covering Landry, and I kind of took a step,” Mathieu said. “He threw it and I was able to make a play. I think that’s just kind of football 101.”

The interception put the Kanas City offense in business at the Browns’ 19-yard line. But Mahomes and company couldn’t capitalize on the turnover, however, and kicker Harrison Butker hit the left upright on a 33-yard field goal.

The Browns then put together back-to-back drives of 77 and 75 yards, spanning a total of 26 plays and encompassing 12 minutes, 55 seconds. In between Chiefs quarterback Patrick Mahomes was knocked out of the game, and Cleveland closed the gap to within one score.

Defensive end Frank Clark felt the defense focused on starting the game fast and tackled well in the first half. But the Browns running 20 offensive plays in the third quarter took its toll.

“We did a hell of a job keeping them contained (in the first half),” Clark said. “Second half, we came out kind of flat as far as making tackles. We started tackling high. Some of those long drives you see guys get a little tired, a little fatigue, a little technique go away.”

When the Browns offense took the field at their own 20-yard line with precisely 8 minutes remaining, momentum had shifted their direction. Head coach Andy Reid, however, says his team didn’t flinch.

“Very easily, Pat goes down, the defense can deflate, the offense deflates as opposed to just going, ‘Hey, let’s step up and go, man,'” Reid said. “Everybody, just pick their game up an inch and let’s go. And that’s what you saw today.”

The Browns fought their way to one first down, with Mayfield picking up the yard to gain on a quarterback sneak. But the Chiefs stuffed Chubb on a first-down run, and then the pass rush forced two hurried throws from Mayfield. The Cleveland offense mustered all of 12 yards on seven plays in 3:51 in their final possession of the season.

“I thought we got pressure on the quarterback,” Reid said. “That was important. We had a couple of big tackles, I thought that was big. I thought the coverage was tight.”

As the Chiefs have done many times in close games through the season, Clark said he and his teammates rose to the challenge in the moment.

“The best (wins) are when you do it as a team, when you can go in there even though you got all this adversity, you got these different situations that came up in the game,” Clark said. “Pat goes out, your quarterback, those are all adverse situations. In adversity, the true man rises to the top, the cream rises to the top in adversity.”