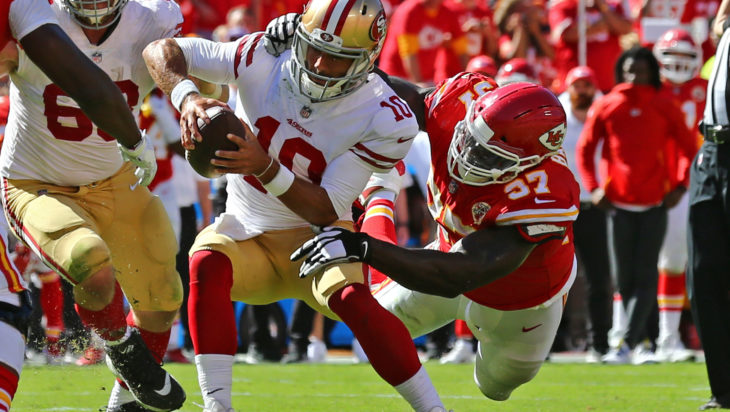 The 49ers offense revolves around head coach Kyle Shanahan’s zone run-blocking scheme, using a steady dose of runs to open up the play-action and RPO game. The majority of the runs are outside the tackles on stretch runs, outside zone, toss plays and sweeps. The running backs can stretch plays laterally to open up a hole to squeeze through or create a cutback lane to attack. The high-level offensive line can use its athleticism to reach blocks on the outside runs and get to the second level to open up big holes for the running backs.

San Francisco possesses a stable of running backs that fit the system very well as runners and pass catchers. Raheem Mostert exploded in the post-season, rushing for 220 yards and four touchdowns in the NFC Championship game to punch the 49ers ticket to the Super Bowl. Tevin Coleman, Matt Breida and Jeff Wilson Jr. have all played roles, with Coleman and Breida both starting at different points this season and Wilson mainly working as the short-yardage and goal-line back. Fullback Kyle Juszczyk is on the field in most sets, working primarily as a lead blocker, but he’s a receiving threat out of the backfield as well.

Shanahan doesn’t ask quarterback Jimmy Garoppolo to do very much in the passing game due to the success of the run game. He is a capable passer, however, who does most of his damage inside the numbers, 5 to 15 yards downfield.

Garoppolo has a few targets he looks to in the passing game. Tight end George Kittle is a matchup nightmare and along with Travis Kelce is one of the two best tight ends in the league. Former Broncos receiver Emmanuel Sanders should be no stranger to this Chiefs’ defense. Rookie receiver Deebo Samuel has taken over the spotlight late in the season with his ability to rack up big yards after the catch and to take the reverse for big gains as well.

The key to stopping the 49ers offense lies in putting the ball in the hands of Garoppolo. Not that he isn’t capable of leading the offense, but San Francisco must run the ball efficiently and use play-action and RPOs effectively to open up the game plan for Garoppolo. Forcing the 49ers out of their normal plan of attack should create undue stress on the relatively young quarterback.

The first way to frustrate Shanahan’s scheme is to set a hard edge against the outside runs, pinning the run inside where all the help defenders are. The edge defenders also need to squeeze the gaps from outside to inside, eliminating potential running lanes, while also maintaining outside leverage. With the runners being unable to stretch the play laterally to open holes, they will be forced to cut back, leaving the backside defenders as the ones responsible for making the play. They have to make the open field tackle and limit the yards after contact.

With the outside zone runs slowed down, the Chiefs will have to prepare to stop Samuel on the reverse. It’s a play that the 49ers look to a few times per game, and will dial it up to try to take advantage of any over pursuit from the defense. If Kansas City can contain the reverse and slow down the outside runs, the 49ers will have to look to the air, without the benefit of sucking up the linebackers on play-action.

To attack Garoppolo in the passing game, the Chiefs should look to get interior pressure, pushing the pocket back into Garoppolo, and denying him the opportunity to step into his throws comfortably. He is decent at maneuvering in the pocket to avoid pressure off the edge, but tends to struggle when the pocket collapses from the inside, increasing the likelihood of him making a costly mistake.