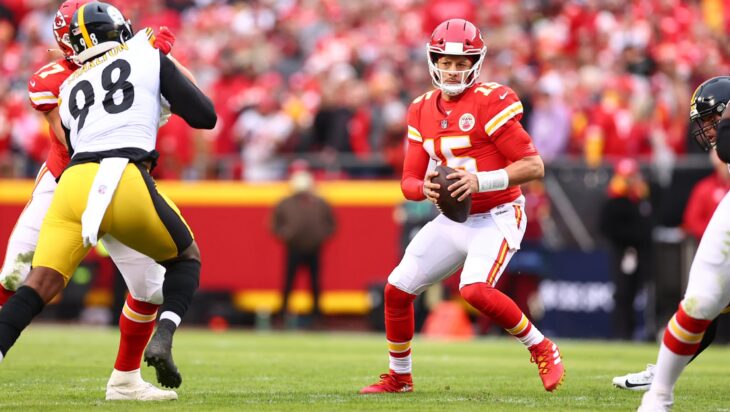 KANSAS CITY, Mo. — The Chiefs rolled to a 36-10 victory over the Pittsburgh Steelers on Sunday, clinching the AFC West division title for a sixth-straight season and strengthening their bid toward earning the No. 1 seed in the AFC playoff picture.

Winning the AFC West has become commonplace for head coach Andy Reid but he says he doesn’t take it for granted at all.

The Chiefs’ victory over the Steelers coupled with the Los Angeles Chargers (8-7) falling to the Houston Texans 41-29 allowed the Chiefs (11-4) to eliminate the Chargers from the AFC West race.

Patrick Mahomes and the Kansas City offense were virtually perfect most of the day, racing out to a 30-0 lead in the second half before the Steelers broke onto the scoreboard.

Mahomes finished the day 23-of-30 passing for 258 yards and three touchdowns. Byron Pringle led receivers with 75 yards and two touchdowns on six catches. Darrel Williams added 55 yards on 11 rushes. Derrick Gore had a total of 104 yards from scrimmage thanks to 12 rushes for 43 yards and three catches for 61 more.

This is the fourth AFC West title for Mahomes as a starting quarterback, and he says he “100 percent” appreciation for winning a division crown.

“It’s a tough division that you have to go in with the mindset of we have to win the AFC West divisional games to get where we want to be at,” Mahomes said. “To be able to win the AFC West, to be able to get that first goal – obviously like you said we have more goals that we want to go after, but this was the first one. To take this step, you got to build that momentum into the playoffs and try to make a run at it.”

Kansas City currently sits in the pole position of the AFC playoff race with a one-game lead over the Tennessee (10-5) Titans and a two-game lead over the division-leading Buffalo Bills and Cincinnati Bengals (each 9-6). The Chiefs visit the Bengals next week.

This marks the 14th AFC West division title for the Chiefs. Denver, Las Vegas and the Los Angeles Chargers each own 15 division crowns.

The Chiefs six-straight division championship also marks the first time a team has pulled off that feat in the AFC West. The Raiders won five division titles in a row from 1972-76. The Broncos equaled that streak from 2011-15.