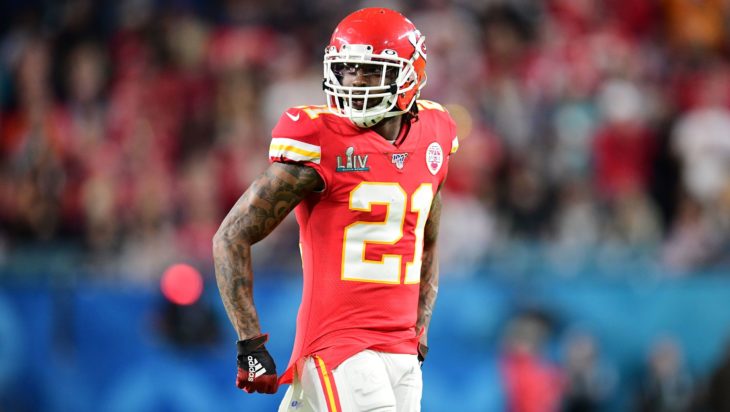 Authorities charged Breeland with resisting arrest, transporting alcohol in a motor vehicle with the seal broken, possessing an open container of beer or wine in a motor vehicle, possession of one or less of marijuana or 10 grams of hash and driving without a license.

Court records showed bond set at a total of $3,622 with a hearing set for Tuesday evening. York County records show a court date will be assigned on June 12.

Breeland was released on bond Tuesday night and took to the Twitter sharing his side of the story.

“Lot of people wanna speculate on my situation and don’t know the facts,” Breeland posted. “I really was at a gas pump got approach(ed) by two guys. Police pulled up they throw something (in) my car as police pulled up which the cop saw and I was the one detained wit(h) charges that really shouldn’t be charged.

“I’m not fighting to clear a name I don’t care wat [sic] people think, I know the truth, innocent until proven guilty.”

A Chiefs representative said the club is aware of the situation but will have no further comment at this time.

The arrest report alleges that a York County Sherriff’s Office deputy witnessed throw a small but into Breeland’s vehicle and detected a strong odor of marijuana. Breeland allegedly pulled away and resisted when the deputy attempted to place handcuffs on him, then got back in his car. The deputy asserts Breeland’s hands were not visible and he was not following the deputy’s orders, prompting the officer to draw his firearm.

Breeland’s attorneys issued a letter highlight that the player faces only misdemeanor charges and none of the charges allege Breeland consumed alcohol at the time of the arrest.

“At the time of his encounter with law enforcement, Mr. Breeland was leaving a gas station store after making a lawful purchase,” the letter reads. “Moments after returning to his vehicle, a 2020 Range Rover with valid temporary paper tags, law enforcement officers approached Mr. Breeland and drew their weapons. We look forward to investigating why this level of force was necessary.”

Breeland entered the offseason without a contract for 2020 and appeared on target to land a lucrative free-agent deal. He picked up 48 total tackles and two interceptions for the Chiefs last season. He also tallied seven tackles and provided a key interception for the Chiefs in their Super Bowl LIV victory over the San Francisco 49ers.

The market didn’t develop as anticipated for he 28-year, seven-year veteran, and he agreed to return to the Chiefs on a one-year deal worth a total of $2.5 million with an additional $500,000 in roster bonus.