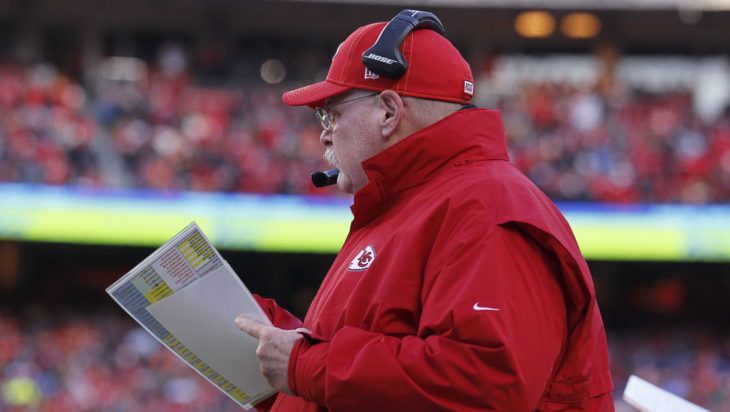 KANSAS CITY, Mo. — Normally this time of year Chiefs head coach Andy Reid would be in his office, evaluating players for the upcoming draft, entertaining potential free agents and breaking down film with his coaching staff.

This year he finds himself working alone in his basement, connecting with the football world virtually with the COVID-19 pandemic disrupting business as usual.

“My heart goes out to everybody that’s suffering from this son of a gun in our community,” Reid said during a conference call with reporters Thursday. “I know it’s a crazy time right now, and all the front-line people that are out there kicking butt working on this thing, we just appreciate everything.”

So far the Chiefs haven’t had any direct impact from the pandemic with its players or coaching staff. Reid didn’t indicate how many, if any, members of the organization have been tested but reported no positive tests thus far. “So far everybody’s good in that,” he said.

Yet the football business isn’t much different from any other business deemed “non-essential” right now. The Chiefs officially closed their offices to non-essential personnel on March 16, five days before Kansas City, Mo., mayor Quinton Lucas issued a stay-at-home order for the city.

Reid, working from one of his wife’s antique desks with a video monitor, a laptop, an iPad and a cell phone, finds himself keeping up hope while making plans for the coming year.

“We’re approaching it like we’re having a season,” Reid said. “I think it’s two-fold because it can be a real positive energy-giver back to the country at a time of maybe need for that. At the same time we’re very sensitive to everything going on.”

Reid carries a reputation as a creature of habit and a meticulous planner. True to form, the coach finds himself trying to carry on business as usual while planning for all potential eventualities he can identify.

“I’ve got different plans I’ve kind of setup for different stages, whether it’s virtual work or whether they let us back in the building for field work,” Reid said. “Whatever it is, I’ve put together plans for that, and then we’ll just have to take it day-by-day, see what presents itself. Mine main concern right now obviously is that everybody stays as safe as they can with this thing going on and as healthy as they can.”

Normally this time of season Reid would be meeting with potential draft candidates coming through the team’s facility for interviews and workouts. The workouts are a no-go – although the team conducted a few with local area prospects before the mandated shutdown – but the coach uses Zoom and Webex to interview young players in this year’s draft class. The old dog finds himself learning new tricks.

“The young guys, they just whip right through it,” Reid said. “Us old guys, we have to learn everything but Zoom and Webex have done a good thing. We’re able to talk to players, the incoming players, the guys that are in the draft, we’re able to go through and interview them on the Webex. That’s been beneficial.”

The league remains steadfast in conducting the draft April 23-25 despite festering doubts as to the wisdom of the plan. Reid said the team doesn’t have a firm plan in place for how it will conduct the draft. The club has considered basing their draft room at a local hotel if necessary to get personnel staff in one location.

The NFL indefinitely delayed the start of the league’s offseason program, originally scheduled to begin April 20 for the Chiefs. Strength and conditioning coach Barry Rubin reached out to players to provide them with their own workout schedules. Newly signed offensive lineman Mike Remmers said last week he built a makeshift gym in his garage after trips to multiple Dick’s Sporting Goods to get everything he needed.

“We’re prepared to do all of that,” Reid said. “Then again if they’re allowed back in the building, we’re good with that. We’ve got that all planned out too. I think we’re good either way.”

Reid doesn’t have any more clairvoyance on long-term future than anyone else in the NFL. He does see two sides of the equation, however: providing a respite from the gloom without endangering safety.

“I think that the league is very sensitive to what’s going on but at the same time if this can keep people safe, it can be beneficial to the country and kind of help things get going again, I think that that’s a positive.