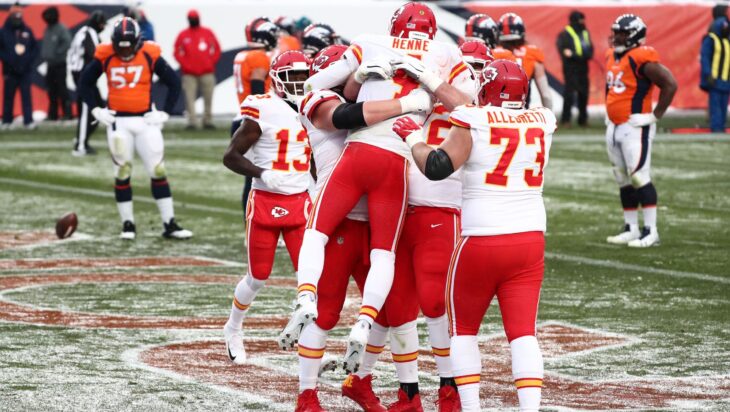 Kansas City’s victory over the Denver Broncos was long assured before Chad Henne carried the ball across the goal line and unleashed years of frustration with an emotional spike of the football.

It might have been an inconsequential touchdown in the boxscore, boosting the Chiefs to a 43-16 win over the Broncos, but it held special meaning to Henne. It was nearly eight years since the last time he scored a touchdown in an NFL regular-season game, making the moment meaningful to Henne’s teammates such as Patrick Mahomes.

“With a guy like Chad, he puts in the work every single day he’s there and he’s put in the time to be prepared for moments like these and for him to be able to make a big play was a sweet moment and it’s something that I’m sure he’ll appreciate,” Mahomes said after the win.

The last time Henne scored a touchdown, it was Dec. 2, 2012. The then-Jacksonville quarterback put the ball into the end zone from 1-yard out to give the Jaguars a 10-7 lead over Buffalo. The Bills would go on to win the game 34-18.

In fact, it’s been more than six years since Henne’s thrown a touchdown pass in an NFL game. That was a 63-yard connection with Marcedes Lewis on Sept. 14, 2014, in a 41-10 loss to Washington.

Since then Henne spent three seasons backing up Blake Bortles in Jacksonville before moving to Kansas City in 2018 to backup Mahomes. In two of the last six seasons, Henne didn’t even attempt a pass. He had thrown five passes in the five past seasons before Sunday’s game at Denver.

With the conclusion no longer in doubt, Henne entered the game and showed no signs of rust from so much time on the bench. He completed both of his passes for 13 yards in addition to his touchdown run. He finished the game with minus-2 yards rushing thanks to three-straight kneel-downs to end the game but doesn’t matter to the Chiefs.

Henne’s teammates mobbed him in the end zone, and he encountered more celebrations on the sideline, too. Mahomes says the joy for Henne from his teammates is part of the team’s brotherhood.

“From the first guy on this roster all the way down to the last guy on the roster,” Mahomes said. “We really support each other and we’re going to go out there and show the same support no matter what the situation is or who’s in the game. I think that’s why you have such a great chemistry in this locker room and why people come in and know that we’re all competing to be the best.”