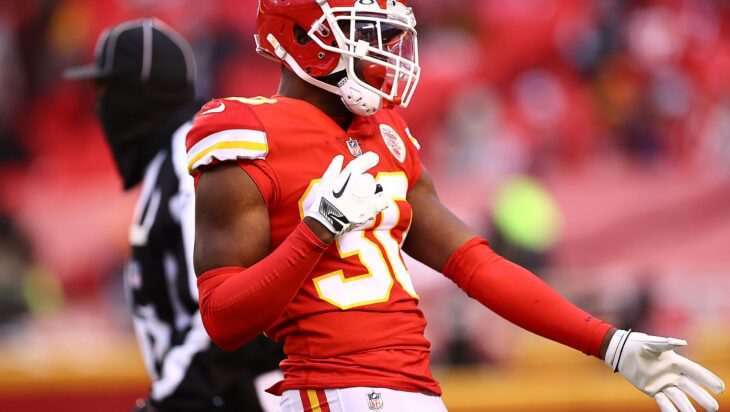 Less than 24 hours after sustaining a fractured left femur and undergoing surgery at a local hospital, Chiefs cornerback Deandre Baker was back at the team’s training complex and starting the road to recovery that he hopes will land him in the Kansas City backfield for the 2021 season.

Head coach Andy Reid says he’s happy to see the former first-round draft pick back in the facility after a devastating injury suffered in the team’s 38-21 loss to the Los Angeles Chargers.

“It’s an amazing deal,” Reid said Monday. “When you saw it on the field, which I was standing right there – these doctors, the things that they can do are incredible. If you had to have a break, I guess this was the break to have, because it fit back together well.”

Reid said the team’s medical staff informed him the fracture was a clean break and the prognosis is good for a complete recovery. He added baker was already bearing a little bit of weight on the leg Monday.

“Without being a doctor, I’m just telling you the prognosis is good for him, which is important,” Reid said. “He was actually playing very good, so we look forward to getting him back.”

Baker, selected No. 30 overall in the first round of the 2019 NFL Draft by the New York Giants, joined the Chiefs on Nov. 19 after a tumultuous offseason. Baker and Quinton Dunbar of the Seattle Seahawks were charged with armed robbery stemming from an alleged incident at a party on May 13 in Miramar, Florida. The charges were dropped in November after the alleged victims signed sword statements saying Baker was not involved in the robber. An attorney representing the alleged victims was charged with extortion for attempting to solicit payment from Baker for the witness to recant their story, according to prosecutors.

The NFL placed Baker on the commissioner’s exempt list on July 27 pending the investigation, which meant he did not participate in offseason programs or training camp with the Giants. New York waived Baker on Sept. 8. The dropping of charges paved the way for Baker’s return to the NFL, and general manager Brett Veach signed him to the team’s practice squad.

Since his arrival in Kanas City, Baker drew rave reviews for his performance on the practice field including from defensive coordinator Steve Spagnuolo and defensive backs/cornerbacks coach Sam Madison.

“He has some skills, he has some tools, so I see why he was a first-rounder and why people rated him the way he did coming out of college,” Madison said. “But we’re just going to keep working at him and Veach as well as coach Reid they’re doing a very good job with him as well as coach Spags.”

The Chiefs viewed Baker as a potentially key part of the secondary in 2021. With veteran Bashaud Breeland entering a free agent season and Charvarius Ward entering a contract season in 2021, the Chiefs were eager to see what Baker could do late in the season. The club elevated him from the practice squad for three games, and he was busy against the Chargers with five combined tackles, an 11-yard sack against Justin Herbert and a broken up pass.

The club hasn’t specified a timetable for Baker’s return but the hope is he can return to full strength before the start of training camp in July. Reid is eager to see what he can do upon his return to action.

“I think full recovery is, unless there are any setbacks, full recovery is going to a beautiful thing for him down the and he’ll still be able to ply and do the things he did before,” Reid said. “That’s what I’m happiest about.”