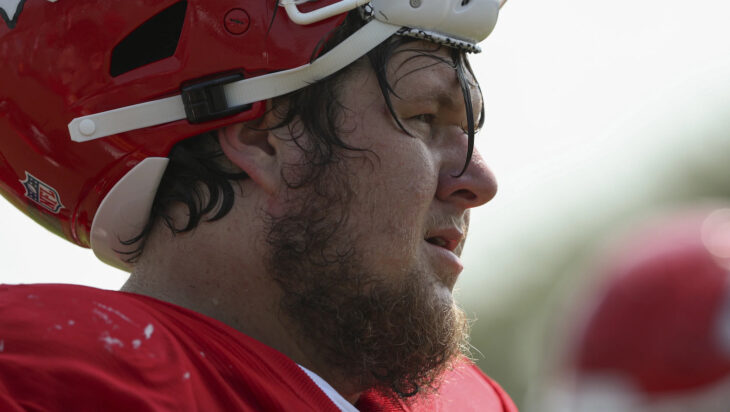 ST JOSEPH, Mo. — With temperatures soaring into the 80s and a heat index in the mid-90s, sweat dripped down the face of Chiefs rookie center Creed Humphrey. With the offense in the midst of a drive designed to test mental and physical limits, Humphrey had one simple message on his mind.

“Don’t really let anything else distract you,” Humphrey said. “Don’t let the heat distract you, anything like that. Just take it one play at a time and just attack every play.”

That’s the mentality required during long drive drills when head coach Andy Reid and his staff challenge their first-team units to the brink. Nothing stopped Monday’s 16-play, 12-minute drive that started at the offense’s 1-yard line. If the offense didn’t convert a third down, the marker went back to first down and they started all over again.

As offensive coordinator Eric Bieniemy says, “it takes uncommon men and uncommon people to do what we do.”

“Because common folks, outside of this pool of what we do, it’s easy to tap out and it’s easy to give in,” Bieniemy said. “We have to find a way to dig into our core to help us show that regardless of how physically or mentally tired I am, I got to find a way to strain to finish for the next play. And that’s all that matters.”

Receiver Mecole Hardman says it’s the kind of day you have to push through.

“When it’s hot these are the days you want to be out there because it’s the kind of the test and see where you’re at,” Hardman said. “You don’t look forward to it but it’s days when it’s time to work today and it’s going to be a working day.”

“If we can learn how to do that together, we’re going to have an opportunity to accomplish a lot of great things,” Bieniemy said. “That’s what I appreciate about today and days like this because more than anything, it ain’t necessarily about how many points you score.

You might have heard the Chiefs offense didn’t fare well during Monday’s practice, and there’s a good reason why. Monday was an unwinnable scenario for the offense.

Monday’s practice was largely a 2-hour, 9-minute test of resilience of the Kansas City offense. Not only did the offense endure the long-drive drill, it encountered a series of scenarios designed to put its back against the wall.

After the usual conditioning, individual drills and an installation period, the squad went into the team blitz, 10 plays where the defensive came after the offense hard.

After additional individual drills, a nine-on-seven period challenged the offense’s ability to run between the tackles. Bieniemy’s voice cracked through loud and clear excoriating his offensive line to clear holes for the running backs.

The next full team period put the offense in another challenging scenario: 25 seconds on the clock, third-and-7 on the opposing team’s 15-yard line and needing a touchdown. Only the No. 2 offense came out with a win.

After special teams focused on punt coverage, the offensive and defensive lines took part in one-on-one drills while the rest of the squad took part in seven-on-seven. After that followed the dreaded long-drive period and special teams work on punt returns.

Offensive play of the day: The best catch of the day came during seven-on-seven work when Daurice Fountain made a one-handed catch on a deep ball from Chad Henne down the left sideline. Fountain has impressed since arriving on a tryout basis at rookie minicamp in May and is worth keeping an eye on during the preseason games.

Defensive play of the day: Cornerback BoPete Keyes took advantage of a communication breakdown against the No. 3 offense, bursting out of nowhere to intercept a pass from Shane Buechele. Keyes is making a strong bid to win one of the final spots at cornerback in the secondary.

Player of the day: Not even sure if Mahomes spent more time in the offensive backfield Monday than Chris Jones did. Playing primarily on the outside, Jones picked up at least a couple of training camp sacks and brought pressure on several other snaps as well. Jones is excelling thus far in his transition to edge rusher.

Defensive end Joshua Kaindoh left practice a few minutes early Monday due to a hamstring injury. He briefly visited the medical tent before walking up the hill back to the locker room.

Linebacker Willie Gay worked on the sidelines again during Monday’s practice as he works his way through the league’s concussion protocol. It remains unlikely Gay steps onto the field until after the team’s preseason game this Saturday against San Francisco.

Running back Darrel Williams (knee) was added to the injury list on Monday. He worked on the sidelines wearing a compression sleeve on his right leg. Also not practicing Monday but in attendance were defensive end Alex Okafor (hamstring), tight end Evan Baylis (ankle) and offensive linemen Mike Remmers (back) and Laurent Duvernay-Tardif (hand).

Receiver Antonio Callaway (bone bruise) did not appear at practice nor did guard/center Darryl Williams, who is on the COVID-19 reserve list. The Chiefs suited up just 12 offensive linemen for practice Monday

Offensive lineman Kyle Long remains on the physically unable to perform list while defensive end Malik Herring is on the non-football injury list.

It’s a helmet and shells practice kicking off at 9:15 a.m. on Tuesday in St. Joseph open exclusively to the club’s season ticket members. The Chiefs have an off day on Wednesday before returning for a planned padded practice Thursday, their last workout before heading to San Francisco for their opening preseason game on Saturday night.

Tickets for most training camp practices are free but fans must reserve tickets online in advance. That includes Tuesday’s season ticket member event.