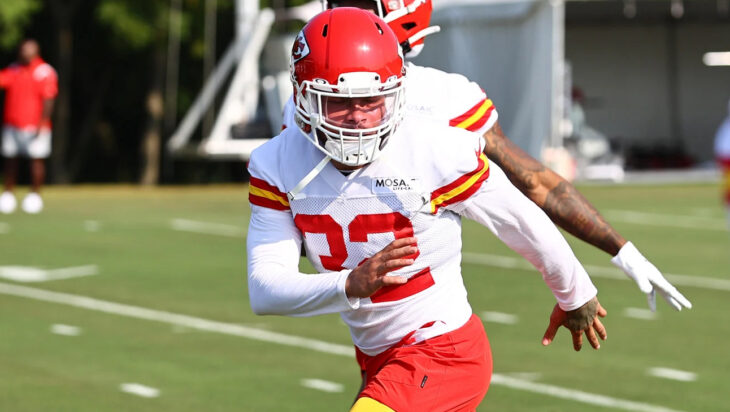 ST. JOSEPH, Mo. — Chiefs safety Tyrann Mathieu had a quick one-word answer when asked following Wednesday’s opening practice of training camp if he expected a contract extension between himself and the club.

But getting an extension done hasn’t been all the simple. Mathieu is entering the final season of a three-year deal with the club worth $42 million. He will make $14.55 million in base salary with a cap hit of $19.73 million.

While Mathieu’s answer was short and sweet, club chairman and CEO Clark Hunt gave a more protracted message, albeit with a similar sentiment.

“I’ve heard Tyrann say that he would like to extend his career in Kansas City, and we feel the same way about that,” Hunt said. “Hopefully that will work out. The timing is obviously uncertain.”

Mathieu said he’s not disappointed the extension didn’t get completed before the beginning of training camp.

“I think most players would like to have things done before they get to the season, but like I said I’m all about ball,” Mathieu said. “I love ball, so it’s important for me to stay focused on that and let other things just handle themselves.”

Head coach Andy Reid says he doesn’t have any worries when it comes to Mathieu setting aside contract drama on the football field.

Mathieu is deadset on making sure the contract negotiation doesn’t become a distraction.

“The only thing on my mind right now is getting off to a fast start, making plays and continuing to lead my group,” Mathieu said. “I think anything else takes away from who I am.”

In case you didn’t hear … it was hot for the first day of full-squad workouts at camp. Practice wrapped up just after 11 a.m. with a temperature of 87 degrees, a heat index of 95 and no wind. The flags atop the goalposts fluttered at times but there was virtually no breeze at ground level.

Most of the day’s highlights came during the seven-on-seven period. Patrick Mahomes took a deep shot down the right sideline through the hands of Tyreek Hill on the first snap, but surprisingly it was other receivers who had big moments throughout the morning.

Demarcus Robinson went skyward, twisting in midair to make a catch against Charvarius Ward. Patrick Mahomes did Patrick Mahomes things, including slinging a sidearm pass beyond the outstretched arms of linebacker Anthony Hitchens with Ward pursuing from behind.

Other notes and observations:

Offensive play of the day: Mahomes and Mecole Hardman matched their timing perfectly during seven-on-seven drills. Mahomes dropped a deep ball down the left sideline into the hands of Hardman, who streaked past Baker to make the play and go into the end zone.

Defensive play of the day: Mahomes never saw linebacker Willie Gay coming when he tried to deliver a quick throw to Robinson. Gay appeared to fly in out of nowhere, deflecting the pass harmlessly to the ground. Robinson wasn’t Gay’s man, but he made him his man.

Player of the day: Hard not to go with Gay on day one. The second-year linebacker showed his quickness all day long, but most importantly he also demonstrated quicker reads and greater reaction than he did during his rookie season. In addition to his play against Robinson, he also nearly intercepted Mahomes on a miscommunication between quarterback and receiver. Seeing Gay make plays in the passing game against receivers is promising on day one of camp.

Hitchens tweaked his hamstring during practice and did not finish the session. Running back Darwin Thompson was added to the reserve COVID-19 list on Wednesday and was absent from practice, along with long snapper James Winchester who is also on COVID-19 reserve.

Wide receiver Chris Finke cleared waivers on Tuesday and is on the club’s injured reserve list.

The Chiefs signed former Kansas State long snapper Drew Scott on Tuesday to fill in for Winchester. He’s wearing No. 43.

Wide receiver Darrius Shepherd, a native of Blue Springs, switched to No. 9. He was previously assigned No. 30. Finke wore No. 9 prior to landing on injured reserve.

I loved everything about the training camp reports filed by my friend Terez Paylor during his days on the beat with the Kansas City Star. I learned so much by watching Terez cover this team, and sitting next to him in the media workroom for two seasons was a master class in beat writing.

I have tried to emulate as much of Terez’s coverage while trying to make it my own. When Terez left the regular Chiefs beat for Yahoo Sports covering the entire league in 2018, I asked if he would mind if I continued his tradition of providing a training camp playlist of the music heard during practice.

In true Terez fashion, he embraced the idea. “I would love to see someone else carry on the tradition,” he told.

I haven’t always done a great job with. Terez was a better multitasker than I am. He could have one eye on the quarterbacks on one field and another eye on the defense on the other field while noting Post Malone’s “Celebration” was blasting over the speakers.

I will never be as good as Terez at training camp, but I’m striving to be the best I can be. In that spirit, here’s today’s camp playlist.

I’ve not had a chance to speak to Frank about it. There’s obviously a legal process there. At some point the NFL may get involved as well. We’ll cooperate with the league on whatever they need.

The Chiefs practice at 9:15 a.m. on Thursday in the first session open to all fans after a season-ticket members-only workout on Wednesday. It’s the third day of the five-day acclimation period, which means players can wear helmets and protective shirts and play at full speed but no contact is allowed.

Practices on Friday and Saturday kickoff at 9:15 a.m. with players allowed to practice with helmets, shells and spiders (light pads) at full speed. After a day off on Sunday, Monday’s 9:15 a.m. practice marks the first time players can workout in full pads.

Tickets for most training camp practices are free but fans must reserve tickets online in advance.