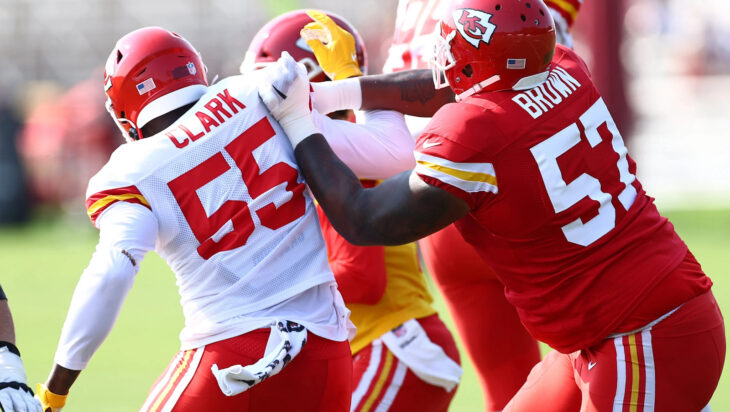 ST. JOSEPH, Mo. — The rebuilt Chiefs’ offensive line gets its first test Saturday night in the preseason openers against the San Francisco 49ers, and Orland Brown Jr. is more eager than most to make his statement in his Kansas City debut.

Training camp normally serves as a tuneup for veteran players. This season Brown is working in a new position with a new offense and a new set of teammates while trying to help a Super Bowl contender create a new identity for its offensive line.

Two of the biggest challenges for an offensive lineman moving into a new system are learning the language of the offense and learning new techniques. When players put the pads on for the first time last week, Brown used the one-on-one pass blocking drills with defensive linemen to test his refined tactics.

“I really use that drill as an opportunity to just work on whatever I want to work on,” Brown said. “At the end of the day to me, I’m not necessarily approaching it to win. I’m approaching it to work on my technique that I’m set working on for that day, whether that be super aggressive with my feet, super aggressive with my hands, punching, stuff like that.”

“Orlando is doing a very good job,” Bieniemy said. “I know those guys are doing some things, learning some communication, but the thing that I’m impressed about is the mistakes that he does make, he doesn’t repeat them. That’s a great sign.”

While many things have changed around Brown entering his fourth season in the league, one thing remains the same. He’s still playing with the same chip on his shoulder that motivated him to succeed in Baltimore.

“I look forward to being able to get rid of that sigma of this guy can’t play left tackle in a pass-first offense,” Brown said.

Monday’s padded practice with third-down situations and long-drive put the offensive in difficult positions, and Tuesday’s 10-10-10 session does the same for the defense, according to coordinator Steve Spagnuolo.

“That’s one of those 10-10-10 practices that are painful for a defensive coach because it’s hard to simulate a look,” Spagnuolo said. “It’s painful, I’m being honest with you. It’s tough on those young offensive guys, they don’t really know yet how to operate as a look squad.”

Tuesday’s 82-minute practice under cloudy skies and windy conditions brief rain shower served as largely a mock run-through for the offense without much for the defense. Special teams, however, may have been the most productive with Harrison Butker, Tommy Townsend and return specialists getting an opportunity to work in adverse conditions.

Right guard Laurent Duvernay-Tardif has been wearing a soft cast on his right hand, and on Tuesday the NFL Network reported he suffered a broken bone. The injury does not require surgery but the 30-year-old lineman could start the season on injured reserve.

The Chiefs otherwise reported no new injuries on Tuesday. Linebacker Willie Gay brought his helmet to practice for the first time since entering the league’s concussion protocol on Aug. 4 but he remained on the sidelines.

Wide receiver Antonio Callaway (bone bruise) was the only player absent from practice on Tuesday. Offensive lineman Kyle Long (leg) remains on the physically unable to perform list and defensive end Malik Herring (knee) is on the non-football injury list.

100 percent, man. I don’t want to say that I’m a gamer or anything like that because I think that’s kind of weird. But I definitely approach games differently, I feel as though. It’s just a different switch once you get out there and the lights are on. It’s just a different feel. I feel like for some reason it’s a lot easier for me to let my emotions roll in agame-like situation.

Chiefs LT Orlando Brown Jr. on whether he has a different switch for practice settings versus game day

The club has an off-day on Wednesday before returning for a planned padded practice starting at 9:15 a.m. Thursday. The club heads to San Francisco on Friday for their first preseason game at the 49ers kicking off at 7:30 p.m. Saturday. After another off-day on Sunday, the team returns to St. Joseph for the final three days of training camp starting Monday.

Tickets for most training camp practices are free but fans must reserve tickets online in advance.