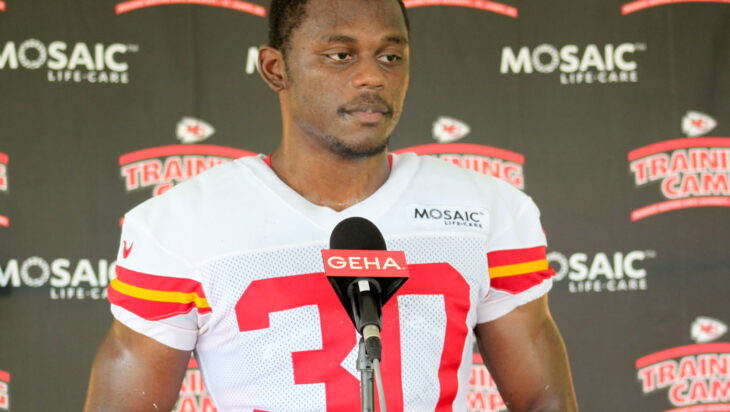 ST. JOSEPH, Mo. — The first two NFL seasons for Deandre Baker have been a rollercoaster of highs and lows both on and off the field, but the 23-year-old cornerback is finally finding peace in Kansas City.

“It means a lot to me that the Chiefs gave me another chance at a phenomenal organization,” Baker said after practice on Sunday. “I’m just here to work, happy to be here.”

The No. 30 overall pick for the New York Giants in the first round of the 2019 NFL Draft, Baker appeared on his way to stardom. Following an uneven rookie season, the Miami native found himself ensnared in a legal drama.

On May 14, 2020, the Miramar, Florida Police Department issued a warrant for the arrest of Baker along with then Seattle Seahawks cornerback Quinton Dunbar on charges of armed robbery and aggravated assault. The Giants waived Baker on Sept. 8. Authorities dropped the charges on Nov. 16.

Baker understandably doesn’t want to revisit the episode. He says he learned to “just be aware of your surroundings.”

“It feels good to have that behind me,” Baker said. “I’m just looking forward to getting better every day with my team and just happy to be here.”

Three days after the charges were dropped, Baker signed with the Chiefs practice squad and made a quick impression on the coaching staff. He earned game-day elevations from the practice squad three times late in the season, including for a Week 17 start against the Los Angeles Chargers. He picked up five total tackles and his first career NFL sack before disaster struck.

Baker suffered a fractured femur, an injury that ended his season and kept him on the sidelines for the team’s offseason workouts.”

“The hardest part was not being out there with the team, helping the guys get better and practicing, being able to help the team,” Baker said. “The best part was being back out there now, back on my feet. I can run and do things I wasn’t able to do a couple of months ago.”

Now Baker says he feels “pretty close to 100%” and ready to compete for a spot on the team’s cornerback depth chart. L’Jarius Sneed, Charvarius Ward and Rashad Fenton enter training camp as the club’s leading candidates at corner but the Chiefs are excited to see what Baker can do once he’s fully healthy.

“It was just like it was eating him alive sitting there watching,” Thornhill said of Baker sitting out OTAs while rehabbing. “But watching him out here, he’s been doing a heck of a job. He’s been getting his legs moving, he looks pretty good to me.”

Baker has one simple goal for himself heading into training camp.

“I just want to help the team and show the guys that I want to be here, come out there and work and show them that I deserve to be here.”

Amidst an excessive heat warning in St. Joseph, Mother Nature provided the Chiefs a reprieve with overcast skies and the temperature topping out at 78 degrees. That served as a much-needed break after a steamy opening session on Saturday left many players gassed.

The 95-minute session opened with “Tell the Vision” providing the soundtrack for the strengthening period but otherwise, it was a quiet instructional period on the field. Players went through position drills and an install period followed by two separate seven-on-seven sessions and wrapping up with a special teams period.

This minicamp also serves as an acclimation period for players, allowing quarterbacks to work on their timing and veterans returning from injuries to get up to practice speed.

For the rookies, however, the minicamp allows them to get a refresher course after their 16 offseason workouts in May and June. Defensive end Joshua Kaindoh said defensive line coach Brendan Daly has been focusing on the fundamentals.

“Hands, hips, feet and know my playbook,” Kaindoh said. “Just knowing little stuff like that, knowing where to be, what to do.”

NOTES: First-year running back Derrick Gore is getting plenty of work as the only running back in the minicamp, and he’s displayed good hands and receiving skills. … Linebacker Nick Bolton has spent much of the camp working on pass coverage and shows good movement dropping back into coverage. … Tight end Noah Gray has demonstrated an ability to elevate for high throws and also has made several tough contested catches in traffic. … Patrick Mahomes was a big rusty on Saturday but delivered a 7-of-7 performance on Sunday, including a red zone touchdown throw to Gray.

Offensive play of the day: Backup quarterback Chad Henne continues looking sharp early in camp, and the play that drew the loudest reaction of the day came during the red zone seven-on-seven period. Henne delivered a back shoulder bullet to the left sideline in the end zone and rookie Cornell Powell turned to make a great catch in tight coverage.

Defensive play of the day: Undrafted rookie cornerback Marlon Character nearly pulled off a stunning interception in breaking up a pass from quarterback Shane Buechele. Character skied to get one hand on a ball thrown over his head and looked like he might put the ball away for a pick.

Player of the day: Hard not to give this honor to Henne for a second day in a row.

I feel like not having OTAs (last year), that bothered me because of the fact I wasn’t around a lot of the guys. I was fighting that battle alone. Just like you tear your ACL, you feel like you’re by yourself. You want to see the guys that in the locker because you need to have someone to surround you to talk to them and lift you up sometimes. I didn’t have that, but with this year, I had guys always around me, just to joke around in the locker room and have fun, and then I can also watching football. Even though I wasn’t participating, I was out there watching, giving my calls and communicating with coach Spags. That still allowed me to keep up with my game.

— Safety Juan Thornhill on differences between 2020 and 2021 offseasons

Fortson went down in the back end zone during seven-on-seven drills and limped off the field, later receiving treatment on the sideline from Rick Burkholder, the team’s vice president of sports medicine and performance. Fortson returned to the field later in practice, however, taking part in the special teams period.

Wide receiver Chris Finke left the field near the end of the seven-on-seven period for an evaluation in the medical tent and later rode back in the front seat of the cart to the locker room. The team didn’t provide an immediate update on his injury.

On Saturday the Chiefs placed safety Armani Watts on the physically unable to perform list and defensive end Malik Herring on the non-football injury list. Both players still count toward the 90-man active roster.

Herring appeared on the sidelines at practice Sunday wearing No. 70. He was originally assigned No. 97 during rookie minicamp.

That move would signal that veteran defensive end Alex Okafor will reclaim No. 97 when he returns to the active roster. Okafor wore No. 97 during the 2019 season with the Chiefs before switching last season to No. 57, the number he wore with both the Saints and Cardinals. No. 57 now belongs to tackle Orlando Brown Jr.

It’s one more quick closed practice for rookies, quarterbacks and injured players on Monday morning. Veterans don’t normally attend the final day of the minicamp, so only the rookies expect to be on the field tomorrow.

The team along with Missouri Western State University and Mosaic Life Care host a press conference at 11:30 a.m. Monday to officially open training camp. The remaining veteran players on the roster are due to arrive in the afternoon.

Players start their acclimation period on Tuesday with strength and conditioning tests, following by the first public practice at 9:15 a.m. on July 28 open exclusively to season ticket members. The first practice open to the public kicks off at 9:15 a.m. on July 29. As a reminder, fans attending training camp must reserve tickets in advance on the team’s website.