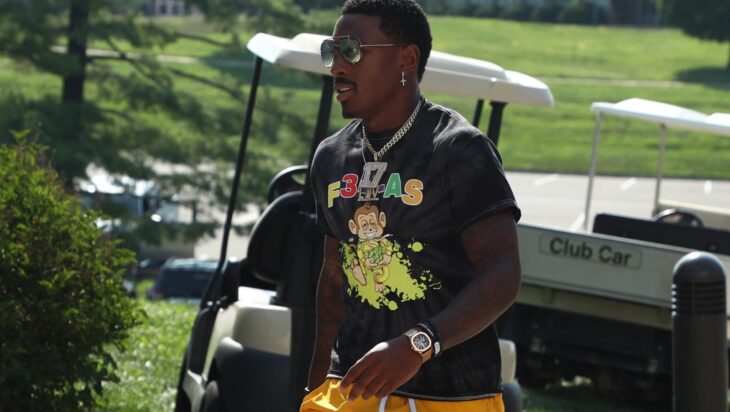 ST. JOSEPH, Mo. — It was a bit more muted affair than in past seasons as the Chiefs checked into training camp, with no throng of media, no autograph-seeking fans or the sight of Anthony Sherman driving a racecar across the campus of Missouri Western State University.

“It’s good to be back,” Donovan told the audience inside the Hall of Fame Room inside Spratt Memorial Stadium.

It’s the 11th year for Chiefs training camp in St. Joseph after a one-year hiatus due to the pandemic, and as always there are a few new additions to the facilities on campus.

“One that you’ll be able to see and will impact our fans directly is a new fan viewing area at the end zone of the practice fields which we think will create a really cool gathering space for our fans,” Donovan said.

The new berm is similar to the hillside along the end zones closest to Spratt Stadium and will allow more fans to line that side of the practice fields with better viewing positions. There are temporary bleachers atop the berm as well, and tents are planned for the area in future years.

“All the improvements that been made are really, really appreciated and make their lives a little bit easier and a little bit more efficient, hopefully,” Donovan said.

The sun returned to St. Joseph for an abbreviated practice on the final day of minicamp Monday morning as veterans started trickling into Scanlon Hall on the other side of the Missouri Western campus.

Veterans typically get an off day for the final day of minicamp, so only 23 players took part in the 75-minute practice session. Quarterbacks Patrick Mahomes and Chad Henne along with safety Juan Thornhill and defensive end Taco Charlton did not practice.

It was another practice heavy on instruction for the rookies with position drills packed around two eight-play seven-on-seven sessions.

The highlight of the day: with Derrick Gore the only running back in camp, offensive coordinator Eric Bieniemy took reps in the backfield from the quarterbacks during handoff drills.

Offensive play of the day: First-year quarterback Anthony Gordon completed a perfectly thrown ball down the right sideline to tight end Jody Fortson in seven-on-seven drills. Fortson hauled the ball in over his shoulder in tight coverage for a big gain.

Defensive play of the day: Big day for receivers makes it a tough day on the defense, including linebacker Nick Bolton. But the second-round pick also came up with the best defensive effort of the day. After getting beat by tight end Noah Gray on the first snap of the seven-on-seven period in the red zone, Bolton recovered on the next play, reaching in front of Fortson to knock down a Shane Buechele pass in the end zone.

Player of the day: Minicamp is a passing camp so it’s only appropriate a quarterback walks away with this award for the third-straight day. Anthony Gordon was nearly perfect in seven-on-seven drills, completing 7-of-8 passing including four-straight touchdowns in red-zone work. He capped off his morning with a perfect corner post throw to receiver Maurice Ffrench for a score in the red zone.

Wide receiver Chris Finke didn’t practice on Monday and the club later in the day placed him on waivers with an injury designation. If he clears waivers, he will return to the Chiefs on injured reserve.

The club also placed long snapper James Winchester on the reserve/COVID-19 list. He is expected to arrive in training camp after finishing a 10-day isolation period.

We’ll that’s a hard loss, man, you still got that bad taste in your mouth. I think as a collective group we’re just all trying to get back to get that taste out of our mouth from losing that game. The better way to do is to come in and work every day and grind and do the things we need to get better each and every day. We’re all motivated, definitely. I think people don’t understand, that really put a bigger chip on our shoulder and want us to get back to that goal of ours of being in a Super Bowl and also winning it. I think we’re motivated enough to get back there and put in the work to get back there. I think it’s going to an interesting season and it’s going to be a hard season, hard long season, but I think we got the players and coaches here to do it. It’s just up to us to put in that work.

Season ticket members get the first crack at watching the team practice on Wednesday morning at 9:15 a.m. The first practice open to the public kicks off at 9:15 a.m. on Thursday. As a reminder, fans attending training camp must reserve tickets in advance on the team’s website.