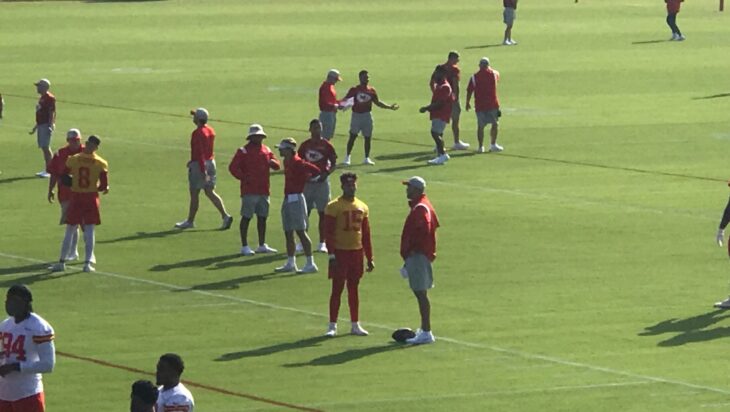 ST. JOSEPH, Mo. — The fans haven’t arrived yet and only 28 players took the field but the 2021 edition of the Chiefs opened training camp on Saturday with the first workout under the blazing summer sun at Missouri Western State University.

Patrick Mahomes led the group of quarterbacks, rookies and injured players returning from injury during the 95-minute workout. The three days of practice before all the veterans arrive are of special benefit for rookies who get to refresh the knowledge they picked up during offseason training activities.

Tight end Noah Gray says it was a “blessing” to get a full offseason period before reporting to camp.

“I don’t know how the rookies last year did it, so I think you got to give a credit to those guys who are sophomores now in the league,” Gray said. “But going through OTAs really helped just from a knowledge standpoint, understanding the basic concepts that this offense asks you to know. It was definitely a huge help from that perspective.”

Only rookies, quarterbacks and players rehabbing injuries were allowed to report on Friday, with a total of 30 Chiefs players arriving in the first wave.

Safety Juan Thornhill (knee), defensive end Taco Charlton (ankle) and cornerback Deandre Baker (leg) arrived in camp early as they work their way back into form. Baker took part in the seven-on-seven after sitting out during offseason practices.

The complete roster working in camp as of Saturday:

With only 28 players on the field and no contact allowed, the team is limited to conditioning, individuals drills, installation periods and seven-on-seven work.

The temperature topped out at 87 degrees by the end of practice, and the heat certainly seemed to take its toll. Tight end Jody Fortson, who had a busy day as the top target during seven-on-seven periods, took a knee on the sideline at one point.

And when you only have 28 players on the field, including just one running back, sometimes players must play out of position. Rookie free-agent quarterback Steve Buechele lined up in the backfield as Derrick Gore took a breather and caught a pass from Mahomes for a short gain.

Offensive play of the day: Mahomes bought time waiting for a receiver to break open before delivering a bullet toward the right sideline in the direction of Fortson, who made a leaping two-handed grab above his head.

Defensive play of the day: Rookie free agent linebacker Riley Cole delivered two big plays in the passing game. On the second play during seven-on-seven drills, Cole dived to knock down a Mahomes pass intended for Fortson over the middle. Later in the period Cole found him self in the right place at the right time as quarterback Anthony Gordon delivered a ball into a tight window. The ball appeared to bounce off hands and a helmet before Cole snatched the ball out of the air for the interception.

Player of the day: Chad Henne was nearly perfect on the day in the pocket, including back-to-back touchdown throws in the red zone during seven-on-seven work to Chris Finke and Derrick Gore.

It’s just why I play the game. I love beating people up. I love just knocking someone down, rolling over them, just talking in their head when the play is over with. It’s just sort of my personality. If you know me I’m sort of a goon, but I just really enjoy the violent aspect of playing football.
— Offensive lineman Trey Smith on why he likes playing with a violent streak

It’s another closed practice for rookies, quarterbacks and injured players on Sunday morning followed by a final workout on Monday morning. Monday is also report day for the remaining veterans on the roster.