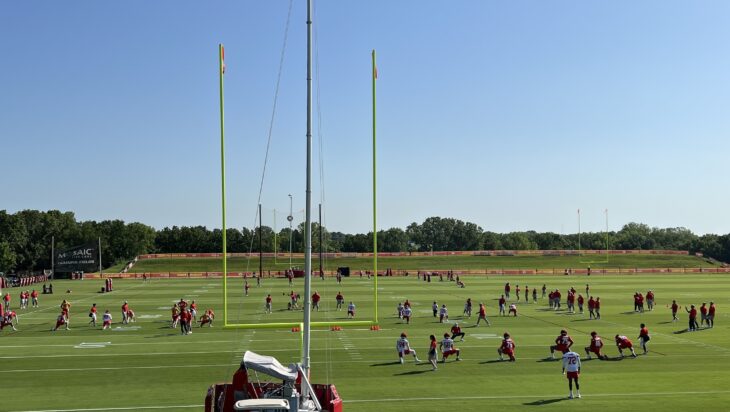 ST. JOSEPH, Mo. — With just 29 players on the field Saturday, the first day of the Chiefs’ minicamp provided rookies with a refresher course on the NFL practice life while allowing veteran quarterbacks and players returning from injuries an opportunity to knock off rust and kickstart the process of preparing for a new season ahead.

Head coach Andy Reid relished the oppotunity to get his squad — albeit in reduced numbers — back on the field.

“I thought they did a nice job working through,” Reid said. “We got short lines so we really slowed it down for them so we could get some quality reps in with the heat and all. But they pushed through it and did a nice job.”

The thermometer read 82 degrees when the opening horn blared at 9:14 a.m. — one minute ahead of schedule and peaked at 87 degrees when the the final period ended at 10:51 a.m. Reid said his team caught a break with breeze that made it feeler cooler than normal.

“That’s training camp,” Reid explained. “You’re battling your body, your mind, all these things and then the scheme thats thrown at you. You’ve got to physically and mentally be able to endure, and that’s not the easiest thing to do. You’ve got to train yourself to be able to do that, and some guys handled it a little bit better than others and that’s why our trainers take care of them. If someone is struggling, we get them out, let them either rest up or take them and do our thing.”

Minicamp practices are closed to the public which restricts some of the details that are on the record for reporters in attendance. That doesn’t matter too much this weekend, since the limited number of players in camp and the work being done on the field makes depth charts and formations nearly irrelevant. There’s no contact or team periods either.

Patrick Mahomes started the first 7-on-7 session with an incompletion to Cornell Powell but was nearly perfect after that, completing eight-straight throws before a drop by tight end Jody Fortson ended the streak. But the duo rebounded during a red-zone period, combining for touchdowns on back-to-back plays, with Fortson losing his helmet but still making the catch. Fortson hauled in another catch two plays later from Chad Henne shy of the goal line — probably not a touchdown in live action but it’s a training camp score after he reached the end zone.

The defensive highlight of the day came from cornerback Trent McDuffie, who batted away a Mahomes pass in the end zone intended for receiver Aaron Parker. Fellow rookie defensive back Nazeeh Johnson also looked sharp in coverage, including defending a red-zone pass from Dustin Crum to tight end Mark Vital.

Reid noted no injuries after practice although linebacker Leo Chenal exited the workout early after the heat got to him. Chenal’s departure came during the team’s final 7-on-7 session.

Reid added offensive lineman Prince Tega Wanogho (leg) to the list of players expected to begin camp on the physically unable to perform (PUP) list. He worked in the training tent on the sideline alongside cornerback Rashad Fenton (shoulder) and offensive lineman Lucas Niang (knee). Wide receiver Justin Ross (foot) also will begin camp on the PUP list but was not seen on the field.

Wide receiver Skyy Moore was limited during offseaso workouts due to a hamstring issue but showed no restrictions on Saturday under the eyes of Reid.

“He looked smooth out here today, strong,” Reid said. “His leg looked like it held up pretty good. You know he’s got those big, big legs, different than a lot of receivers. He’s got like running back legs.”

Sunday marks day two of the three-day minicamp for rookies, quarterbacks and injured players with a 9:15 a.m. practice in St. Joseph. The minicamp is closed to the public.

Veteran players are due to report Monday afternoon. Tuesday is an acclimation for players with the first open practice open to the public at 9:15 a.m., Wednesday, July 27.