ST. JOSEPH, Mo. — Kansas City kicks off its preseason slate Friday night at Arrowhead Stadium against the San Francisco 49ers, and each of the team's quarterbacks carries different expectations and goals for the opener. 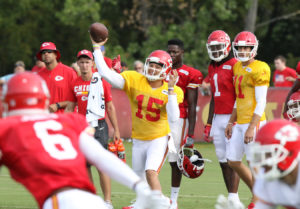 The Chiefs carry one fewer quarterbacks this season but a similar rotation appears likely. Smith stands to play just one or two series before giving way to Bray in the first quarter. Mahomes likely enters the game before halftime with Joel Stave possibly entering the game in the fourth quarter.

Bray knows that as the No. 2 quarterback he's stuck between the team preparing Smith for 2017 and Mahomes for the future. Yet the 25-year-old quarterback must stay ready when the opportunity arises.

"You got to get used to it," Bray said. "You've just got to go out and the reps you get, you got to take advantage of them."

The game marks the first live action for Mahomes. Smith said he still remembers his first preseason game against Oakland in 2005.

Indeed, Smith started his professional career with four-straight three-and-outs. He managed to pick up a first down on his fifth and final drive. That came thanks to a flag for a late hit on the scrambling quarterback out of bounds. He finished his first game 3-of-9 passing for 25 yards. He scrambled twice for 8 yards.

Mahomes entered his first college game in a relief appearance in Texas Tech's 45-35 loss to Oklahoma State on Sept. 25, 2014. He completed 2-of-5 passes for 20 yards and a touchdown with an interception. He also rushed seven times for 16 yards.

"I was a little excited, a little jumpy," Mahomes said. "But I feel like now with having Alex in front of me and Tyler and the guys out there that are established veterans guys that I can learn off them. Then when my time comes I have a little bit more experience going into it."

Smith said he felt a bundle of nerves starting his first NFL preseason game. The No. 1 overall pick in the 2005 draft for team coming off a 2-14 season had high expectations for the 49ers. He believes coming in as a backup for an experienced team benefits Mahomes, even if expectations remain high.

"I think that's a positive for him," Smith said. "I think he's in a better place, so he'll be able to just go out and play."

"Just to go in and try to be efficient when I get my opportunity," Mahomes said. "Just try to move the ball. Put in the playmakers' hands and let them hopefully score some touchdowns."

The inside linebacker group ranks as the most competitive among the Chiefs' position groups. Aside from a healthy Derrick Johnson starting at Will linebacker, almost nothing else remains settled.

Three Chiefs left practice early Monday with Cairo Santos the most notable. Santos headed to the locker room with a groin injury.

Cornerback De'Vante Bausby left practice with an ankle injury. The second-year corner received first-team snaps in recent practices with cornerbacks Steven Nelson and Terrance Mitchell out. Bausby lined up with the second Monday.

QUOTE OF THE DAY

"No. They don't count. No one ca — you've got to get warmed up, you've got to be ready to roll and you want to hit that opener full speed right? That's what they're there for. We've got to figure out the 53 guys on this team, that's what that's for. That's the coaches' and personnel guys' job. But let me tell you, in a month no one really cares about it. Could you tell us our preseason record last year? No, I don't, I don't know it."