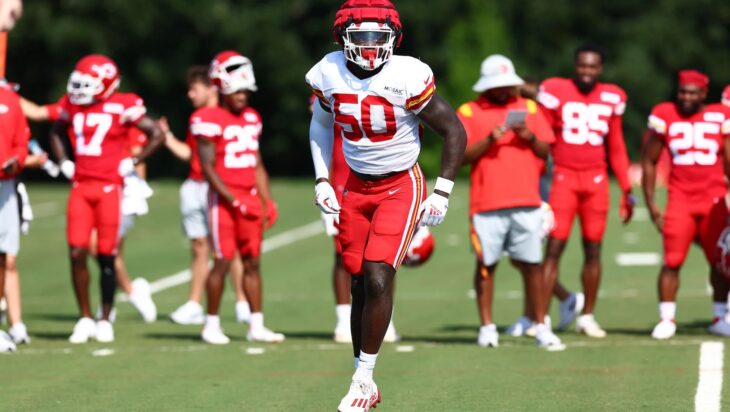 ST. JOSEPH, Mo. — Chiefs linebacker Willie Gay picked off two passes last season but it’s the ones that got away that were on his mind after Wednesday morning’s training camp practice.

“Cowboys, Broncos, I feel a couple of other teams I can say,” Gay said. “I feel like if I make those opportunities and make a play, that’s like five, six interceptions last year.”

In 2021, Darius Leonard of the Colts and Logan Wilson of the Bengals led NFL linebackers with four interceptions. Gay wants to top that particular leaderboard this year, and he’s confident in his chances. He’s intercepted teammate Patrick Mahomes a few times during training camp, and he pulled it off again on Wednesday, picking off a no-look pass in the end zone.

“When Pat throws me some, I know other quarterbacks will because they’re not as good as him,” Gay said.

The 24-year-old Gay enters his third NFL season this fall, and it’s hard to miss the growing confidence and comfort he shows on the field. He’s always played the game with passion — “they call me ‘juice man’ for a reason,” he says. But with Anthony Hitchens and Tyrann Mathieu departed, there’s more focus on Gay and fellow linebacker Nick Bolton to play larger roles on the field and as leaders in the locker room.

“I definitely feel like my role has increased,” Gay said. “Those two guys were big parts of this defense, of this team, so now I feel like me and Nick both, we have bigger roles to fill and to lead this defense to led this team on the defensive side.”

Thunderstorms moved into the St. Joseph area Wednesday morning and unfortunately pushed practice indoors, which meant that it was closed to fans. It was the team’s most extended camp practice yet, stretching 2 hours and 10 minutes.

Indoor practice rules limit some of the reporting since the workout was closed to the public. It was a spirited practice featuring two full-team periods, a lengthy 7-on-7-session and one-on-one breakouts between offensive and defensive linemen as well as tight ends and running backs facing off against linebackers and safeties in blocking and receiving battles.

“Then we jump in and we do one on one pass from there and again, give them parameters to work in,” Reid said. “On a clock so we’re not just going to hang onto the ball all day until they get open. They’ve got to do it within a time. Again, that’s good for both sides. Defense working angles on that and offense trying to set things up according to the route that’s called.”

Rookie wide receiver Skyy Moore returned to the practice field and did not appear to be limited by the hip issue that forced an early departure Tuesday.

“Skyy was the only one that was a question mark for today but he practiced, so we had everybody out there that we expect to be out there,” Reid said.

Tight end Jody Fortson remains on the sidelines due to a quad strain suffered on Saturday that was expected to keep him out for a few days.

Defensive end Carlos Dunlap is scheduled to report to camp on Wednesday and might see his first on-field workouts Thursday morning. The 33-year-old has been excused for personal reasons since he agreed to terms with the club on a contract last week.

Reid says his understanding is that Dunlap is in “pretty good shape” after working out at the same facility in Miami where left tackle Orlando Brown Jr. worked during the offseason prior to his arrival in camp. Like Brown, Dunlap will probably undergo an acclimation period as he ramps up his football activities, Reid explained.

The team is back for a fourth-straight workout Thursday morning at 9:15 a.m. Tickets for the practice are free but must be reserved on the team’s website. The university charges a $5 parking fee per vehicle. Wide receivers and tight ends are scheduled to sign autographs.

Friday is an off day for the team before returning to work on Saturday morning for the ninth full-squad practice of camp. Note that this is a departure from the training camp schedule issued last month when the club originally planned to practice on Friday with an off day on Saturday.