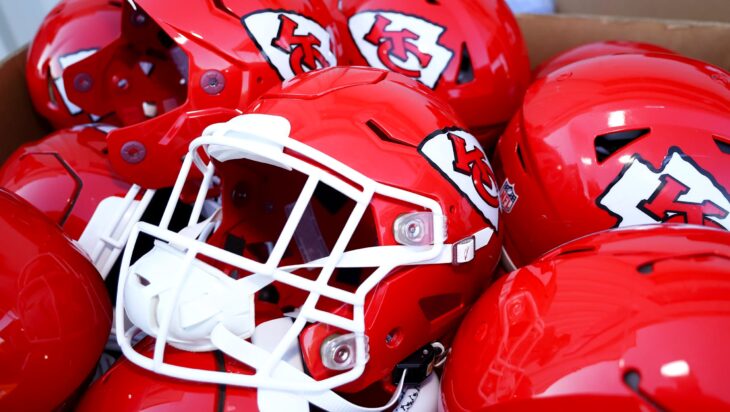 ST. JOSEPH, Mo. — With veterans scheduled to report to Chiefs training camp on Monday afternoon, the million-dollar question — or rather the $16.662-million dollar question — is whether franchise-tagged left tackle Orlando Brown will be among those checking into the residence hall on the campus of Missouri Western State University.

Head coach Andy Reid had a short answer on Friday: I don’t know that.”

The deadline for Brown and the Chiefs to reach a deal on a long-term extension passed July 15. Brown hasn’t yet signed the one-year franchise tag worth $16.662 million, so he’s under no obligation to arrive at camp with his teammates on Monday.

Quarterback Patrick Mahomes said he’s spoken to Brown but didn’t ask him about his contract situation. He emphasized he wanted Brown in camp because “of the guy he is and he’s a leader on this football team.”

“But at the same time when it comes to money and contracts and stuff like that, I’ll never kind of force anyone to do anything because I know they’re trying to provide for their family long term,” Mahomes said. “But as a teammate and as a friend, you want him to be here and be a part of this because it’s always a good atmosphere when you’re out here in St. Joe and you’re getting to be in the building and eat together and practice together.”

Contract holdouts are part of the business of the NFL, and Reid knows the only thing he can do is coach the players who are in attendance.

“This isn’t the first time I’ve been through something like this,” Reid said. “My thing is we just go, and whoever the next guy that’s going to step in there, we know Joe Thuney can do it in a heartbeat. If we need to that direction, we can go that direction. We’ve got some new faces in there that can also do it.”

When a pregame calf injury knocked Brown out of the team’s Week 17 game against Cincinnati last season, Thuney stepped into fill the breach. During offseason workouts the club also took an extensive look at veteran free-agent additions Geron Christian and Roderick Johnson at left tackle. While Reid mentioned Thuney specifically, he didn’t tab the Pro Bowl left guard as the candidate to step in immediately if Brown doesn’t report on Monday.

“I haven’t even got to that point but we know, you know if things keep going, we know he can do that,” Reid said.

One obstacle Brown will face upon his return, Reid explained, will be learning what he’s missed during his absence.

“I would tell you when you miss, you miss It’s hard to make that up, that’s just logical,” Reid said. “But to say he doesn’t have a foundation, he has a foundation of the plays that we run and the things we do. But he missed all of OTAs and all of that so the new stuff that we’ve put in, that’s where he’ll have to catch up.”

Back to fundamentals for Mahomes

The reverberations from the turf toe injury that Mahomes sustained in the divisional playoff victory over Cleveland in January 2021 continued longer than anyone might have expected. Mahomes on Friday explained he spent time this offseason focusing on correcting fundamentals that affected him through parts of two postseason campaigns.

“I kind of got some bad habits of kind of falling off that foot, not planting on the right spot and not making the right throw,” Mahomes said.

Reid said even players such as Mahomes might deviate from their fundamentals when trying to counteract the effects of an injury.

“Sometimes you workaround, you might get into throw you off a tick,” Reid said. “Normally it’s the player that knows that because they’ve got it down to that finest point.”

Mahomes said the toe injury impacted his mechanics, resulting in a weaker base throwing position at times. While the quarterback saw progress in his mechanics during the 2021 season, he improved mechanics a return to his more natural follow-through can lead to tangible improvement in 2022.

The 36 days between the end of the Chiefs’ offseason program and arriving for training camp in St. Joseph flew by for rookie cornerback Trent McDuffie.

“Man, I feel like I didn’t really have a summer,” McDuffie said after arriving at camp Friday. “I went back home, saw the family a little bit, but I’ve been working, studying the plays so that when I come out here it’s like I was already here. A big thing about going back home and chilling is you don’t want to be too lazy. You still want to give your body a little break but you’ve still got to be mentally ready and sharp so you can come out here and do your job.”

“Just listening to them, listen to the little critiques even when I’m on the field,” McDuffie said. “I may make a mistake but come off the field, they tell me what to do and I can fix it up the next day. It’s really awesome playing with guys like that.”

Second-round receiver Skyy Moore spent part of his break in Texas working out with Mahomes. He said the most important lessons learned from those sessions involved how to better run his routes to fit the preferences of Mahomes.

“It’s all about how he wants and the chemistry between the wide receiver and the quarterback,” Moore said. “I’m just trying to feel what he needs from me.”
Don’t forget the luggage

Players reporting for training camp can be seen hauling in pillows, blankets, fans, televisions and other creature comforts from home, but Moore arrived at training camp lighter than anyone else; albeit unintentionally.

“I actually forgot everything,” Moore said. “I had to wake up at 3:30, I had a 5 a.m. flight, and I locked myself out of my hotel in Tampa. I got to get my suitcases shipped overnight. I forgot everything.”

So it’s a good thing that players and staff alike receive a care package from the team’s equipment staff with shirts, shorts and shoes emblazoned with the team’s colors and logos.

I’m going to just rock out with this team-issue gear,” Moore said. “It will be here tomorrow, I’ll be good.”

If you’re planning to make a trip to St. Joseph for Chiefs training camp, the club tweaked made a tweak to its practice schedule. The team will no longer practice on Friday, Aug. 5 but instead will conduct a workout on Saturday, Aug. 6 kicking off at 9:15 a.m. The linebackers group is scheduled to sign autographs following the practice.

The Chiefs open their three-day minicamp for quarterbacks, rookies and players returning from injury with a practice kicking off at 9:15 a.m. Saturday morning. The minicamp practices are closed to the public.

Veteran players are due to report on Monday, July 25. The first official day of training camp, Tuesday, July 26, is an acclimation day limited to physical examinations, team meetings and classroom instruction. The first practice starts at 9:15 a.m. Wednesday, July 27. The practice is open exclusively to the team’s season ticket holders.

As a reminder, all tickets to training camp practices are digital only and must be reserved in advance on the team’s website. Most practices are free of charge but the university does charge $5 per vehicle for parking.