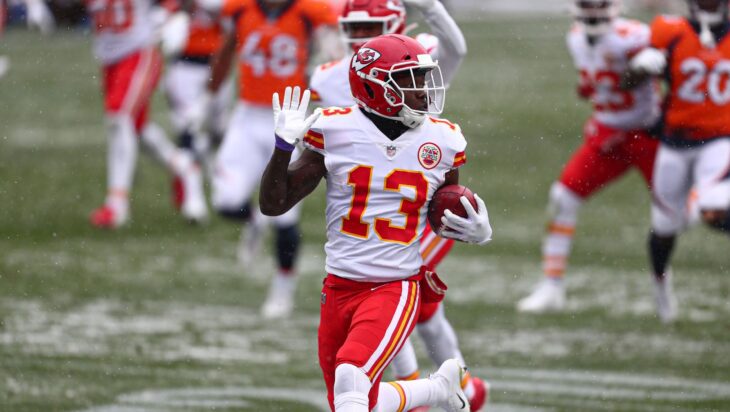 Chiefs wide receiver Byron Pringle doesn’t always know when he’ll get his opportunities but even going back to his days at Butler Community College he always made a pledge to himself.

“Whenever my name is called, I’m just going to give it my all,” Pringle said Sunday after he took advantage of several opportunities in helping boost Kansas City to a 43-16 win at Denver.

Pringle’s first chance to prove himself came midway through the second quarter. Head coach Andy Reid and special teams coordinator Dave Toub have long believed Pringle possesses talent as a kick returner and have looked for moments to test him in the role.

“He was a good player in college with the return game,” Reid said. “He was good in preseason when we did it, he’s healthy, so we wanted to give him an opportunity back there to return.”

Just after the Broncos had closed the game withing 17-9, Pringle drifted two yards deep into the end zone eying the kickoff from Denver’s Brandon McManus.

“When they kicked to the ball to me I knew it was going to my right,” Pringle said. “Once I saw the hole open up I just ran through it (with) power. I knew I had two dudes backside to make miss, and once I made them miss I just ran to the touchdown. I wasn’t looking back.”

Indeed Pringle didn’t look back, racing 102 yards for a touchdown that put the Chiefs up 24-9, building a lead the Broncos would never again challenge.

Pringle received his opportunity with Mecole Hardman averaging 21.1 yards on seven returns this season, a full 5 yards fewer than his output as a rookie in 2019. On Monday night at Buffalo, Hardman averaged just 16.5 yards on two returns, including a near-disastrous 11-yard return that left the Chiefs offense starting at their own 13-yard line nursing a six-point lead in the fourth quarter.

Pringle’s hard-hitting return was just what the Chiefs have been looking for in the return game.

“You see how he hits it,” Reid said. “That becomes important on kickoff returns. I thought he did a nice job with it. He did it, he hit hard and fast and everything else.”

Pringle’s teammates noticed, too. “’You run like a horse, man,” one teammate told him after the touchdown. “You hit that thing fast,” another added.

“Every time I’m back there at practice I hit it hard because I never know when my name will be called to go back there and return,” Pringle said.

The 26-year-old Pringle appeared everyone on the field for the Chiefs on special teams against the Broncos. When rookie punter Tommy Townsend dropped a soft punt inside the Denver 5-yard line, it was Pringle who downed the football at the 1-yard line. That set up a drive that ended with safety Dan Sorensen intercepting a Drew Lock pass and returning it 50 yards for a touchdown that put Kansas City ahead 17-6 early in the second quarter.

Townsend and the Chiefs punt unit has struggled at times pinning opponents inside the 20 this season. Pringle still burns from the opportunity he missed to bury the San Francisco 49ers deep in their own territory in Super Bowl LIV last February.

“I told myself next time I’m able to be able to throw it back in into the field of play, I’m going to do the best I can to get it back to my other players on the field,” Pringle said.

Pringle came racing down the field as a gunner on the right side. Broncos returner K.J. Hamler allowed the ball to sail over his head toward the goal line and put a block on Pringle.

“When the returner was blocking me, I knew he wasn’t going to be blocking me for that long,” Pringle said. “Once I saw the ball take a bounce, I knew it was coming back towards me, so I just picked it up. I was so happy I made that play.

“I know coach Toub was happy, too, because I’ve missed a lot of them.”

Pringle seemed to consistently find his way around the ball on special teams Sunday, even if he didn’t always make the play he wanted. Early in the third quarter, Hamler muffed a Townsend punt at the Denver 25-yard line. Pringle nearly corralled the ball but saw Broncos cornerback Essang Bassey wrap his arms around it.