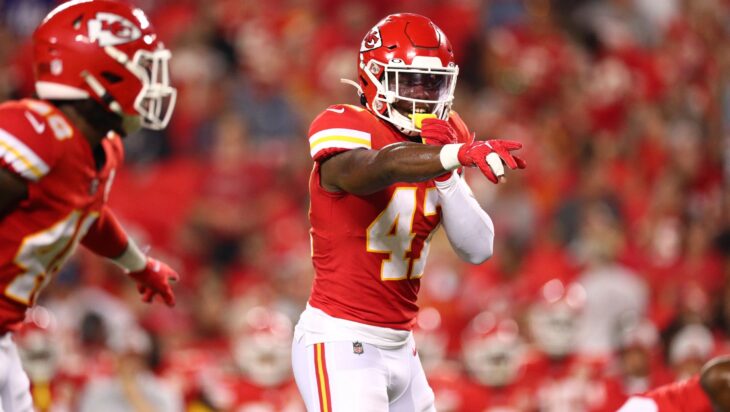 KANSAS CITY, Mo. — The Chiefs whittled their roster down to 53 players starting the 2021 season on Tuesday, waiving 22 players and releasing wide receivers Marcus Kemp and Gehrig Dieter among other moves.

The release of Kemp is a procedural move. With offensive lineman Austin Blythe a candidate to start the season on injured reserve with a designation to return, Blythe had to make Tuesday’s initial 53-player roster. The club can place Blythe on injured reserve Wednesday and re-sign Kemp to the active roster.

Wide receiver Cornell Powell, a selection in the fifth round of this year’s draft, was among those placed on waivers. The club also waived 2020 seventh-round cornerback BoPete Keyes and 2019 sixth-round running back Darwin Thompson.

The club also freed space on the active roster by playing offensive lineman Kyle Long on the physically unable to perform reserve list. That means Long must miss the first six weeks of the season in his return from a leg injury sustained during offseason workouts. Rookie defensive end Malik Herring was also moved to the non-football injury reserve list.

The Chiefs also traded offensive lineman Yasir Durant to the New England Patriots for a 2022 seveth-round choice that originally belonged to the Las Vegas Raiders.

Breaking down the roster

Buechele finished the preseason with gaudy numbers, finishing fourth in the league with 422 passing yards along with three touchdown passes and a passer rating of 93.1. Barring an expected move with a veteran quarterback, Buechele is in line to land on the practice squad as the club’s No. 3 quarterback.

No real surprise with the Chiefs opting to go with four backfield players. Both Thompson and Gore averaged a robust 4.8 yards per carry during the preseason and have made compelling cases for the practice squad.

No more additional moves at tight end with all four remaining players making the roster. Fortson is the feel-good story here, finally landing on the active roster after two seasons on the practice squad after arriving in Kansas City on a tryout basis during the 2019 rookie minicamp. It’s unlikely the Chiefs will keep four tight ends active on game day, but don’t be surprised if it’s Bell and Fortson backing Kelce in Week 1 against Cleveland, with Bell the more polished blocker and Fortson providing an upside as a receiver.

Look for Kemp to return quickly to the active roster; as a vested veteran, he doesn’t have to clear waivers and can re-sign with the club as soon as a spot becomes free later this week. Fountain exceeded all expectations since his arrival in May and is an intriguing name to watch as the season begins. The club needs one of the backups to emerge as a reliable No. 2 option behind Hill, and right now that competition remains wide open.

This is a deeper offensive line than the Chiefs fielded a year ago, and there’s not guarantee the club is finished making moves. But with Remmers and Wylie offering experience depth off the bench, the Chiefs feel ready to weather the attrition that almost always hits the offensive line. Long will be eligible to return after Week 6. Wanogho and Williams are strong practice squad candidates.

It was a tough race between Ward and Harris for a 10th spot along the line, and for now the Chiefs will roll with only nine. The club has five primarily edge players, including Jones who has the flexibility to kick inside. Clark returned to practice in a limited role on Tuesday, and his health in Week 1 is key to this group starting the season strong.

Harris is a mild surprise as a sixth linebacker, but he provides flexibility at all three positions. Gay suffered a toe injury coming out of Friday night’s preseason game, perhaps necessetating the need for a sixth linebacker. Bolton had a strong preseason and should be in line for more playing time than perhaps expected early in the season.

It was certain the Chiefs would keep a sixth cornerback, but they did indeed and Lammons pulled out the final roster spot ahead of Keyes. Lammons is a favorite of special teams coordinator Dave Toub. Fenton continues nursing a hamstring injury. Expect Hughes to start as the team’s No. 3 corner, coming in on the right side when Sneed moves to the slot in subpackages.

Key and Anderson both saw opportunities with the first-team defense and are candidates for the practice squad. Watts remains primarily a special teams ace, which leaves this group a bit thin if injuries hit the trio of Mathiue, Sorensen and Thornhill. It wouldn’t be a surprise if the Chiefs watch cuts around the league for veteran help at safety.

Toub’s lineup is set here with no offseason competition, and don’t expect any changes unless there is an injury.