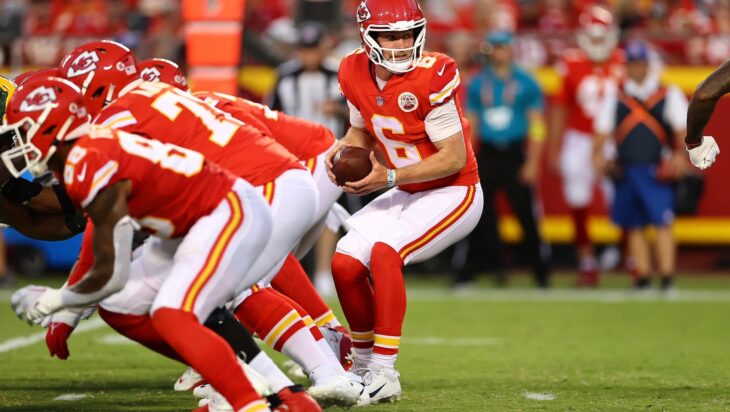 KANSAS CITY, Mo. — It was a wild day on Tuesdays as the Chiefs whittled their roster from 75 players to 53 ahead of the 3 p.m. central time deadline, with some surprise cuts and decisions on the transaction wire.

The club released veteran receivers Daurice Fountain and Josh Gordon along with linebacker Elijah Lee and defensive tackle Danny Shelton in the move down to 53 players. Lee appears ready to re-sign with the club after the Chiefs have the opportunity to place tight end Blake Bell on injured reserve as soon as Wednesday morning.

Also sticking around on the initial active roster was quarterback Shane Buechele, who earned his spot after a strong preseason performance. The second-year quarterback was promoted to the active roster late last season to protect him from other clubs poaching him from the practice squad, and the Chiefs chose not to risk subjecting him to waivers now.

The Chiefs also retained nine of their 10 draft picks, waiving only cornerback Nazeeh Johnson, who is likely to return to the team’s practice squad if no other club claims him. In a mild surprise, the Chiefs kept offensive tackle Darian Kinnard, who spent most of the preseason with the team’s third offensive line unit.

Here’s the team’s initial 53-player roster along with the transactions the club made to get there on Tuesday.

Buechele raised his profile with another solid preseason performance against the Packers, thus ensuring the Chiefs opted to keep three quarterbacks rather than risk placing the 24-year-old on waivers in order to sneak him onto the practice squad. The former SMU Mustang moves into his second season as an understudy behind Mahomes and Henne.

Whether the Chiefs would keep three or four running backs along with fullback Burton was one of the final questions to unravel in building the 53-player roster. Ultimately Veach sticks with the veteran Jones, who turned in a solid performance against Green Bay, rushing for 43 yards on eight carries. Edwards-Helaire will be the every down back but it remains to be seen how the rotation will shake out behind him. Pacheco will be the starting kick returner, so he will be a crucial part of the rotation.

The decision to go with three quarterbacks and five running backs left room for just five receivers, leaving Fountain on the outside for now in a bit of a surprise move. The capacity to keep veterans on the practice squad also leaves the door open for Gordon to return. The health of Smith-Schuster’s knee is an issue worth watching.

The Chiefs plan to place Bell on injured reserve after he underwent surgery for a hip flexor issue, which meant he had to make the 53-player roster in order to be eligible to be designated to return. The absence of Bell leaves the Chiefs in need of a short-yardage tight end and blocking specialist, so it wouldn’t be a surprise to see the Chiefs in the market for another tight end during the next 24 hours scouring cuts throughout the league. Former Rams and Missouri tight end Kendall Blanton, whom the Chiefs put a waiver claim on during training camp, is on the market again after being placed on waivers by Washington. If Bushman clears waivers he’ll land on the club’s injured reserve list but won’t be eligible for a designation to return.

It’s hard to believe the Chiefs will enter the season with Allegretti as the sole backup along the interior of the line, so don’t be surprised again if the Chiefs are active in this position group in the days ahead. Reiter will likely return on the practice squad at least to maintain depth. Christian and Wanogho are the swing tackles for now with Kinnard still a developmental player. Odds are high the Chiefs still make some moves with this position group.

Shelton is a surprise departure but landing on the practice squad would allow him more time to work back to full speed after signing with the club Aug. 15. Shelton’s departure cleared the way for the club to retain both Kaindoh and Herring, who appeared fairly even in their battle with the final roster spot at defensive end. Danna spent time playing on the interior during training camp so depth inside shouldn’t be an issue but the Chiefs acquired Shelton to be a run-stuffing nose tackle capable of occupying blockers, and that remains a need. Herring is nursing an oblique injury so it’s worth watching his status to see if the Chiefs place him on injured reserve, clearing the way for another veteran to return.

The Chiefs expect to bring back Lee as early as Wednesday once Bell lands on injured reserve, bringing this group back to five. Lee is a vested veteran who isn’t subject to waivers, so the club can re-sign him immediately without risking losing him to another club. Chenal is currently in the league’s concussion protocol, which is another situation worth monitoring for Week 1. The disappointment is Carter, whom the club awarded a fully guaranteed $1.77 million contract during the offseason with the expectation he’d be a four-phase special teams player and versatile backup.

No surprises here as the Chiefs retain Lammons for his special teams play rather than keeping the seventh-round draft pick Johnson on the active roster. Johnson should land on the practice squad barring a waiver claim from another club, and Bootle is a candidate to return as well. A young group with a high ceiling but the future may not be here quite yet. The team will rely on Sneed and Fenton to smooth out the learning curve for the three rookies in this group.

The defensive backfield depth chart held firm with the Chiefs waiving Anderson and Key, two second-year players who spent last season with the club, primarily on the practice squad. Bush expects to be a leader on special teams for the Chiefs, and the club will use Cook as a dime safety for this season with a potential starting role in his future.

Again, no drama here at all.