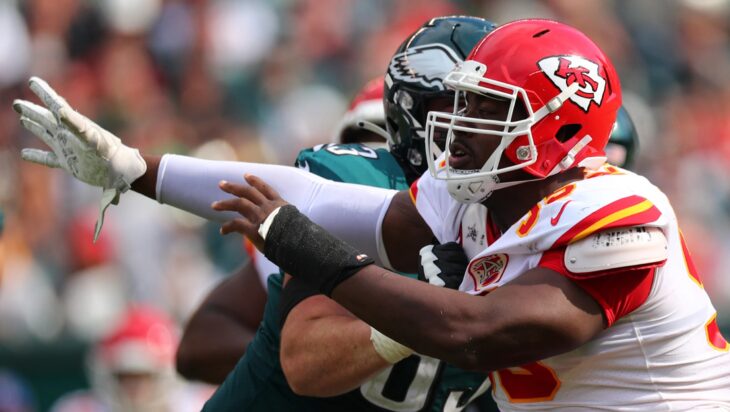 KANSAS CITY, Mo. — It might have gone unnoticed amidst the Chiefs defense allowing 30 points and a season-high 358 passing yards on Sunday to the Philadelphia Eagles but head coach Andy Reid didn’t miss it. He saw an improvement in the team’s pass rush, as evidence by second-year defensive end Michael Danna’s two sacks in the second half.

“I thought it was actually better the second half when you look at,” Reid said during his Monday press conference. “First half wasn’t quite as good as the second half.

The Chiefs defense delivered season-highs with three sacks and six total hits on Eagles quarterback Jalen Hurts, with most of the damage coming in the second half. As the Chiefs have struggled finding consistency in third- and fourth-down defense as well as in the red zone, it’s been an inability to put pressure on opposing quarterbacks that’s the common denominator.

The centerpiece of the Kansas City pass rush, Chris Jones, exemplifies the difficulty the Chiefs have had in harassing opposing passers. After picking up two sacks in a dominating performance against Cleveland in Week 1, Jones has just four total tackles and two quarterback hits with no sacks during the past three games. It’s the least productive three-week period for Jones since the first four weeks of the 2018 season when he tallied only three quarterback hits and no sacks.

The upside: Jones broke out of that slump with at least one sack in his next 11 games, setting a new NFL record. Jones finished the campaign with a career-best 15.5 sacks.

Reid believes Jones’ sack slump has more to do with the opposition than anything else.

“I think that you played three run-teams is probably a factor to it,” Reid said. “That’s probably added to the numbers there.”

It also doesn’t help that Jones is getting little support from his supporting cast. The Chiefs rank tied for 22nd with just eight quarterback knockdowns on the season, and their 17th with a hurry on 7.1 percent of dropbacks, less than half by league leaders Jacksonville (15.2 percent). They have generated pressure on just 16.8 percent of dropbacks, which ranks 27th in the league.

Defensive tackle Jarran Reed, the free agent the club signed to allow Jones to move from defensive tackle to edge rusher, has only six total tackles and three quarterback hits in four games. Danna leads the Chiefs with three sacks and is the only other defensive lineman to pick up a sack this season.

Reed and Jones primarily play the same position on the inside. Both players specialize as 3-tech defensive tackles, which means lining up on the outside shoulder of the offensive guard. The Chiefs remain reluctant to move Jones back inside permanently, preferring only to allow him to rush the passer from the tackle position on third down.

Jones lined up at tackle on only four snaps against the Eagles, and he’s only kicked inside on 20 of 207 total snaps this season.

“We’ve kind of moved him all around is what we’ve done, and I think that’s been important and he’s done a nice job,” Reid said of Jones. “He had several hurries yesterday, he did a nice job with that and was around the quarterback when they did throw the ball at both spots. I think the one thing it normally does out here is it frees him up, gives him a little bit better opportunity to rush.”

Injuries have also limited the effectiveness of the defensive line. Jones has been battling a wrist injury suffered in Week 2, while two separate hamstring injuries have limited defensive end Frank Clark to just one game. Defensive tackle Derrick Nnadi has also been dealing with hip and elbow injuries.

“You add Frank to the equation, Frank was (a Pro Bowler) and you’re missing that element,” Reid said. “I think once we get everybody back in there going and kind of in the flow I think it will pick up a little bit.”

The Chiefs face a challenge this week against the Buffalo Bills, who visit Arrowhead Stadium Sunday night riding a three-game winning streak while averaging 39.3 points per game. Reid believes his team is close to solving the riddle of its defensive letdowns.