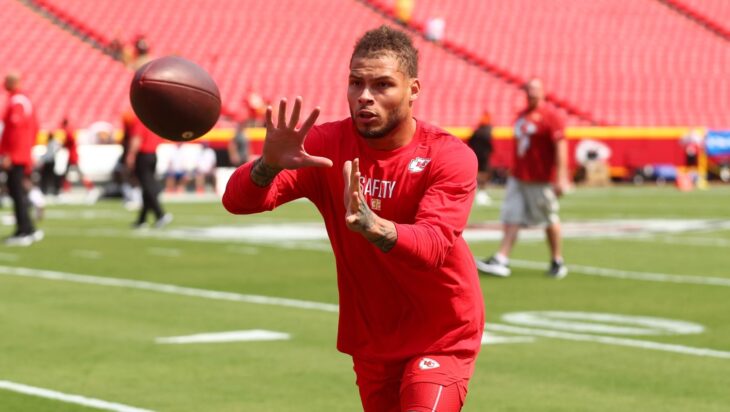 KANSAS CITY, Mo. — Chiefs safety Tyrann Mathieu returned to the team’s active roster on Saturday after a 10-day stint on the COVID-19 reserve list but head coach Andy Reid made the decision to hold out his veteran leader in Sunday’s opener against the Cleveland Browns.

“That was completely me doing that,” Reid said after the team’s 33-29 win over the Browns. “He wanted to play. … I just thought it was the right thing to do. I don’t want to take any steps back.”

The club placed Mathieu, who is vaccinated, on the COVID-19 reserve list on Sept. 1 after a positive test. He needed to post two negative tests at least 24 hours apart to return to the active roster.

But due to this year’s preseason schedule, Mathieu didn’t have much of a chance to practice since the club’s last preseason game against the Minnesota Vikings on Aug. 27. Mathieu took part in pregame warmups with his teammates but the layoff proved too much for Reid to take a chance with his star safety.

“The Badger’s been out for two weeks and it was just best that we went this route,” Reid said.

Mathieu worked out on the field with strength and conditioning coach Barry Rubin and then left after talking with general manager Brett Veach and Rick Burkholder, the team’s vice president of sports medicine and performance.

The Chiefs also played without defensive end Frank Clark, who tested his hamstring during pregame warmups as well. Clark didn’t play in any of the club’s three preseason games and practiced on a limited basis last week.

“That hamstring just never got all the way back,” Reid said. “He practiced and he tried, and took him out and tried warming him up and all that. The thing just wasn’t quite right and we held him out.”

Reid only reported one new injury for the Chiefs on Sunday. Linebacker Anthony Hitchens tweaked his elbow late in the first half, Reid said, but he returned starting the third quarter.

Offensive lineman Austin Blythe (abdomen) was on the inactive list Sunday. Linebacker Willie Gay (toe) remains on injured reserve and is not expected to return until October.