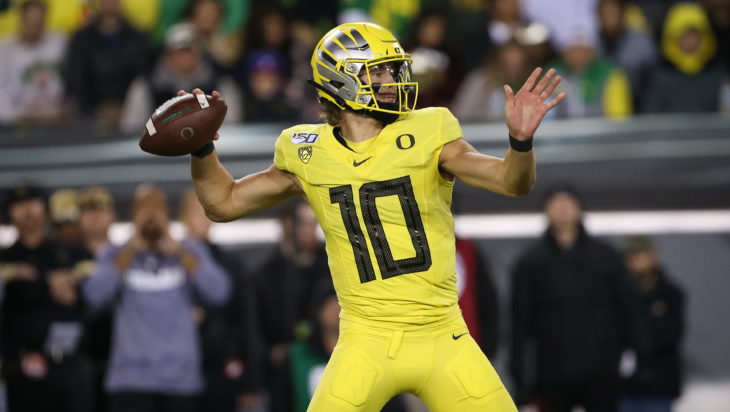 KANSAS CITY, Mo. — In the AFC West it’s all about keeping up with the Joneses – or rather the Mahomeses – so perhaps it’s no surprise that the Chiefs’ divisional rivals targeted offense in Thursday’s opening round of the 2020 NFL Draft.

“I think teams certainly, they got to score some points against us,” Chiefs general manager Brett Veach said following Thursday night’s first round. “I think even if you have a really good defense it’s hard to stop our offense. I think that teams are certainly ready for a track meet when they play the Chiefs.”

The Los Angeles Chargers acted first, selecting Oregon quarterback Justin Herbert with the sixth-overall pick. He was the third quarterback selected, following No. 1 overall pick Joe Burrow to Cincinnati and Tua Tagovailoa going No. 5 to Miami.

The Las Vegas Raiders went wide receiver with the first of their two first-round selections, opting for Alabama speedster Henry Ruggs with the No. 12 pick. The Denver Broncos landed the target they want for second-year quarterback Drew Lock, landing Alabama wide receiver Jerry Jeudy with the No. 15 pick.

The Raiders and Chargers both went defense with the second of their two first-round selections. Las Vegas selected Ohio State cornerback Damon Arnette at No. 19, while Los Angeles moved up to No. 23 in choosing Oklahoma linebacker Kenneth Murray. The Chargers sent second-round (No. 37 overall) and third-round (No. 71) picks to New England in exchange for the No. 23 pick.

Even the Chiefs themselves jumped on the offensive player train, adding LSU running back Clyde Edwards-Helaire with the No. 32 selection of the first round.

“Clyde was a guy, high football IQ, high football character, dynamic playmaker, can step in right away,” Veach said. “We have him under contract for five years.”

Veach said the new offensive additions to their AFC West rivals won’t change the course of his team’s draft plans.

In a division where teams need to outscore the Chiefs and their high-flying offense, it makes sense for each of their divisional rivals to look for added offensive firepower.

Herbert lands in Los Angeles as the heir apparent to Philip Rivers. He won’t be expected to start day one as the Chargers have veteran Tyrod Taylor in the fold. But the 6-foot-6 Herbert brings a powerful arm to Los Angeles and joins an offense loaded with passing targets led by receivers Keenan Allen and Mike Williams, tight end Hunter Henry and running back Austin Ekeler.

Herbert pass for 10,541 yards in four college seasons, capped off by a big senior season with 3,471 yards passing, 32 touchdowns and just six interceptions. He completed 64 percent of his passes at Oregon, including 66.8 percent last season.

Raiders head coach Jon Gruden reportedly coveted his own version of Tyreek Hill, and Ruggs fits that mold. Ruggs posted a blazing 4.27-second 40-yard time at the NFL Combine and he possesses great ability to track the ball downfield. Like Hill, he also plays bigger than his 5-foot-11, 188-pound frame thanks to the 42-inch vertical jump he showcased at the Combine.

The Broncos entered the draft seeking a target for Lock, and Jeudy fits the bill. He caught 77 passes for 1,163 yards and 10 touchdowns for the crimson Tide last season while earning first-team All-American honors.

At 6-foot-1, 193 pounds, Jeudy isn’t as big as a protypical NFL receivers, but draft analyst Dane Brugler writes that Jeudy’s “combination of play speed, brake-and-balance skills and route savvy allow him to uncover anywhere he wants on the field.”

Despite the additional offensive weapons joining the AFC West, Veach says he focus remains on improving his own roster and not making any chess moves against divisional opponents.

“We know that if we continue to make our roster better, then the wins will take care of themselves on Sunday,” Veach said.