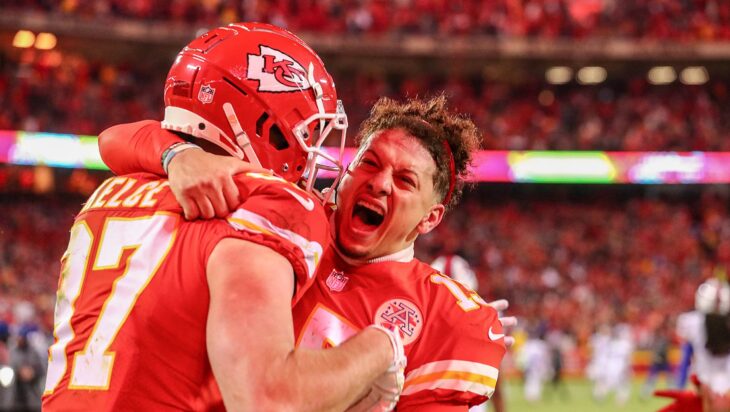 KANSAS CITY, Mo. — Like two heavyweight prizefighters, the Chiefs and the Buffalo Bills stood toe-to-toe trading punches for 58 minutes but it’s a stretch of 15 plays that made Kansas City’s 42-36 epic victory a titanic battle for the ages.

It was a finish that left Chiefs head coach Andy Reid breathless afterward.

“Listen, we just all were part of one of the better games in the National Football League, and we were lucky to come out on that end of it,” Reid said. “The guys battled their hearts out, both teams.”

The first 58 minutes were entertaining enough, filled with deep strikes, tough runs and clutch plays. Only once did either team lead by more than scores at any point in the game, when the Chiefs took a 23-14 lead with 2:06 remaining the third quarter. It took one play, 10 seconds and 75 yards for Buffalo to narrow the lead to 23-21.

When the 2-minute warning arrived in the fourth quarter, the game appeared coming down to one more play. The Bills faced a fourth-and-13 from the Kansas City 27-yard line. In reality, the game was just getting started.

Bills wide receiver Gabriel Davis, who torched the Chiefs for eight catches for 201 yards, ran down the left side and faked towards the corner, causing cornerback Mike Hughes to slip and fall. Davis cut back inside hauled in a pass from quarterback Josh Allen, tiptoeing in the back of the end zone for his third touchdown of the day. Allen connected with receiver Stefon Diggs on a two-point conversion, and Buffalo took a 29-26 lead.

But with 1:54 remaining, neither team was done yet.

Chiefs quarterback Patrick Mahomes missed connections on his next two throws before converting a third-down to tight end Travis Kelce. After another incompletion, Mahomes fired a missile at midfield to receiver Tyreek Hill who bobbed and weaved his way through the Buffalo secondary for 64 yards.

Hill flashed his infamous peace sign celebration at linebacker Matt Milano, perhaps indicating that was the final blow. He said neither Mahomes, Reid or offensive coordinator Eric Bieniemy called “church mode” – that’s the call for when the team wants a ballcarrier to go down short of the goal line to prevent the opponent from getting the ball back with time left on the clock. The Chiefs led 33-29 with 1:02 remaining.

“Patrick Mahomes didn’t say church mode, so I’m going to get a touchdown, why not,’ Hill said. “Plus I had a crazy touchdown celebration planned but Pat, he like stopped it. Crazy.”

Reid also had no problem with Hill getting the points on the board and putting the Chiefs back in the lead.

“We wanted him to score,” Reid said. “We probably would’ve liked to have had it with less time on the clock, but he was battling on that. There wasn’t necessarily going to be any slowing him down. Just to get there was a feat.”

Allen took the field and again began pushing the ball downfield to Davis. The pair connected on gains of 28 and 12 yards followed by a 16-yard pass to Emmanuel Sanders set up the Bills at the Kansas City 19-yard line.

The Chiefs defense, missing veteran safety Tyrann Mathieu who left the game in the first half with a concussion, showed signs of confusion before the snap. Davis ran step-for-step with cornerback L’Jarius Sneed before cutting toward the post, into an area where safety Armani Watts appeared late in defending. Davis hauled in his fourth touchdown of the day, and the Bills led 36-33 with 13 seconds remaining.

Those 13 seconds will go down in history in Kansas City, and infamy in Buffalo.

“The one thing that I love about this team is they didn’t flinch,” Reid said. “They kept focus. Nobody threw in the hat and quit. They just kept battling. We were there with 13 seconds left and everybody’s going, ‘We’ve got to go down and score and get a field goal.’”

When asked what advice he gave his quarterback on the sideline, Reid flashed a sly smirk before delivering the line Chiefs fans will always remember, too.

“When it’s grim, be the Grim Reaper, and go get it,’ Reid said. “He did that. He made everybody around him better, which he is great at, and he just does it effortlessly.”

Whether it’s a fast Friday practice at the facility or an AFC Divisional Round game at Arrowhead, Hill says Mahomes never shows fear.

“Coach Reid is always telling Pat to be great because he is great, trying to add more confidence to him,” Reid said. “Even to us also. Sometimes, with 13 seconds you are looking at the clock thinking, ‘ah.’ Deep down inside we know we can do this because we have the playmakers to do it. We have the coaches to do it. Everything worked out tonight perfectly, exactly how it was supposed to work out.”

Buffalo elected to kick the ball through the end zone rather than try a squib kick to take time off the clock. Mahomes and the offense took the field with those 13 seconds remaining at their own 25-yard line. A quick throw to Hill for 19 yards and a quick throw to Kelce for 25 more, each followed by a timeout, set up Harrison Butker for a 49-yard field goal try. Butker had missed from 50 earlier in the game, but this one went through and knotted the game at 36-36 to force overtime.

The Chiefs won the coin toss, and that was all Kansas City needed. Mahomes was a surgeon during the final 2 minutes of the game and overtime, connecting on 10-of-13 passing for 188 yards in that stretch.

“It was definitely special,” Mahomes said. “To win a game like this at Arrowhead, obviously Super Bowl was probably number one for me, but this one is right up there. To be able to come back a couple times, get points when we needed to get points, score touchdowns, get in field goal range, let Butker kick field goals. I’ll remember it forever.”

The Chiefs never bother to slow down in overtime. Mahomes was a perfect 6-of-6 for 69 yards with Clyde Edwards-Helaire rushing twice for 6 more. On the final play, Kelce ran a double move toward the corner of the end zone. Players, coaches, photographers and security flooded the field. Kelce had no doubt he caught the ball but officials waited for confirmation from the replay booth before letting Reid celebrate with his team.

“It was such a heck of a catch that the official kept me right there and said, ‘The game’s not over,’ for it felt like five minutes,” Reid said. “Everybody was celebrating and I’m going, ‘Good luck getting everybody back.’”

It was an epic win, and a victory Reid wants his team to savor. But not for long. The Chiefs host their fourth-straight AFC Championship game at 2 p.m. central time Sunday against the Cincinnati Bengals, and it’s time to get to work.

“We’ve got a great team coming in here, so we can enjoy this for about a minute and then we’ve got to get ourselves ready for Cincinnati,” he said.